10 Charts that summarise the Indian economy

Last week the RBI, along with its policy measures, published its Monetary Policy Report for the month of April. The report is full of interesting charts and data that give a great overview of the Indian economy. Here are 10 charts that we think show a few macro trends in the economy:

1. CPI Inflation is trending down 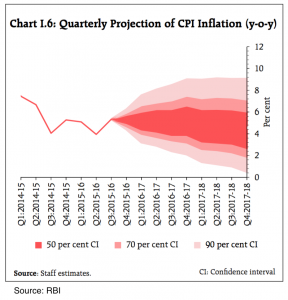 Retail inflation, measured by the CPI, has trended down and marginally undershot the January 2016 target. Going forward, inflation is expected to decline modestly and remain around 5 per cent through 2016-2017.

Falling inflation is a big positive; it puts more money in the hands of savers and gives room for interest rates to fall which will help borrowers as well. The RBI’s credibility is also given a boost by the fact that inflation is sticking to the trajectory that the RBI had set for itself in the Monetary Policy Framework.

2. Food inflation is coming down 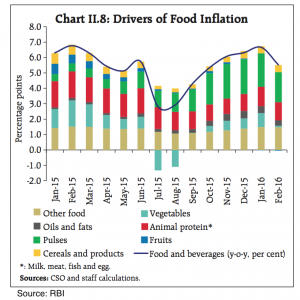 Food and beverages contribute 53 per cent to the average headline inflation so it is important to analyse food inflation if we are to know anything about the headline number. Food inflation rose unrelentingly from September 2015 to January 2016 but has eased in February. According the the RBI’s statements, the fall was because of a larger than anticipated decline in the prices of pulses and effective supply management that helped to limit cereal price rises. 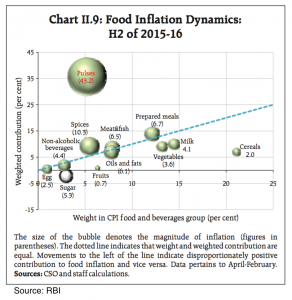 Pulses contribute a whopping 35 per cent to food inflation. Moreover, you can see in the previous chart, the contribution has only been increasing since January 2015 pointing to a structural gap in pulses production which need to be addressed urgently. On the other hand, cereals and other products (which contribute 21.1 per cent to food inflation) have risen only marginally due to measures by the government, limited increases in minimum support prices and a secular fall in global cereal prices. This has helped contain the overall food inflation trajectory. 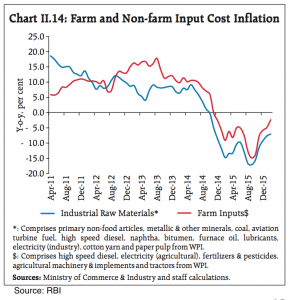 Due to the sustained fall in global energy and non-energy prices, pricing pressure in the indian economy have also remained subdued. In the case of the farm sector, diesel, fertiliser, electricity and agricultural machinery prices have come down. In the case of the industrial sector, falling prices have helped improve the profitability of the sector while keeping the pricing power of corporates in check.

5. Capital Expenditure is yet to pick up 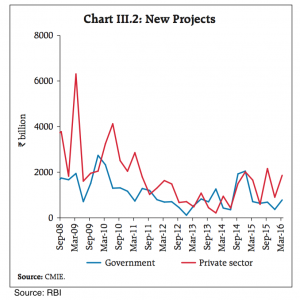 The stock of stranded investment in stalled projects is still high. Even though the government has fast tracked some projects, new investment in both private and public sectors remains subdued. This reflects the prevailing uncertainty in business environment and muted business confidence in the indian economy.

6. Horticultural sector is going through a boom 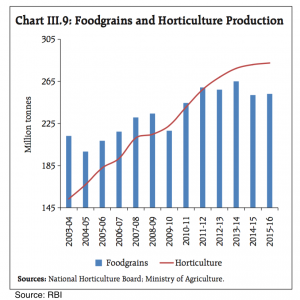 Horticulture production has now outstripped food grain production. Coupled with stability in food grains production, this chart shows that indian agriculture is going through a massive change. Greater weather proofing and timely intervention by the government in a wide variety of areas is beginning to have a positive effect.

7. Services PMI is in positive territory 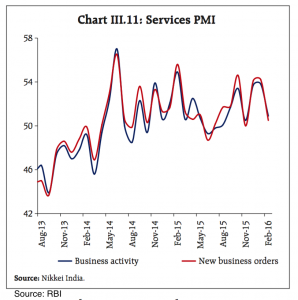 Service sector activity has expanded steadily throughout the year, with trade, hotels, transport, communication, public administration and defence being the main drivers. Road construction has accelerated, cement production has gained traction and steel consumption has gained pace. All these as well as other lead indicators that point to  optimism in business activity and expectations.

8. Short term rates have been structurally coming down 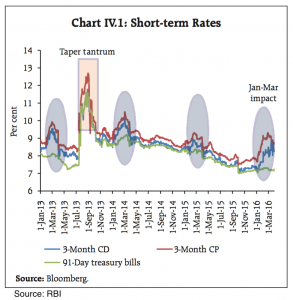 We can see the trend for short term rates from September 2013 till March 2016 is trending down. There are blips in each January-March quarter but that can be attributed to the liquidity deficit arising from advance tax outflow and restricted government spending at the end of the financial year. With the RBI cutting rates and changing its liquidity stance, the banks shifting to marginal cost of lending (MCLR) and with the government starting to spend money in the April quarter, we are likely to see short term rates fall even further.

9. Leading indicators show India is a bright spot in the global economy 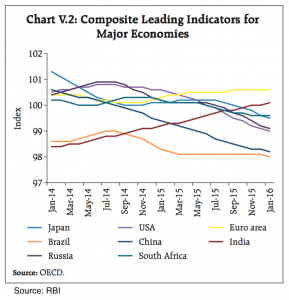 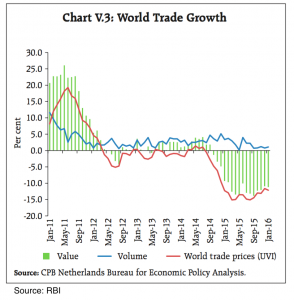 While trade volumes have shown resilience, the collapse in raw material prices means that trade value has fallen and continues to be weak. This does not bode well for exporters.

All in all, it seems like we are starting to see green shoots in the Indian economy. Inflation is coming down and savers finally have positive real interest rates. Lending rates are coming down which should help to boost private investment activity. The services sector is showing positive momentum indicating optimism in business activity. The agriculture sector seems to be on the mend and with the possibility of a normal monsoon, may even surprise on the positive side.

The government has adhered to the fiscal consolidation path and has set out a strategy for boosting rural demand, improving the ease of doing business, boosting infrastructure and bringing in institutional reform. Continued implementation of these measures should boost productivity and put India on a much stronger economic growth path going forward.

1 thought on “10 Charts that summarise the Indian economy”