How will the GST and UDAY affect state budgets? | Part 1

This post, which is divided into three parts, will look at the implications of reforms such as UDAY and GST on state budgets. In the first part, we will examine why it is important to look at this data as well as give an overview of the current trends in state budgets. In part 2 and part 3, we will take a closer look at the proposed UDAY scheme and the GST.

Why does this matter?

The central government has a lot of reforms on the table. Of these, there are 3 reforms which affect the states in a major way:

The first reform, the GST, would simplify and standardise the tax system across states and improve the ease of doing business in India.

The second reform aims to increase competition between states, which will promote development, whilst freeing states from centre-defined subsidies. The logic behind this reform is that the states are the ones that are best positioned to understand their unique local economies and hence should be given freedom to implement reforms that would be more tailored to their constituents. The government has already increased the states share of tax devolution from 32% to 42% and has simultaneously cut the number of centrally sponsored schemes to compensate for revenue loss.

The third reform has an impact on the medium term fiscal position of states because it transfers liabilities from the discoms to the books of state governments while incentivising discoms to become more operationally efficient.

All these three reforms will have a major impact on state revenues and expenditures. Empirical evidence confirms that the composition of government expenditure can have perceptible implications not only for growth, but also for social welfare. Additionally, private investment is currently weak in the Indian economy and growth will rely heavily on government spending. Bringing all these facts together tells us that increasingly, it is the states that will drive growth for the Indian economy. Analysing the trends in their spending, particularly on social and physical infrastructure can give us an idea of growth looking forward.

What are the trends in state spending?

For this part of the post, we refer to the latest RBI report on state finances. 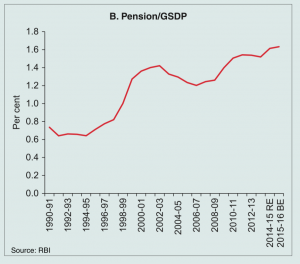 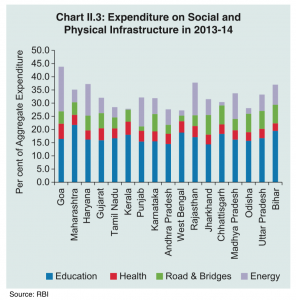 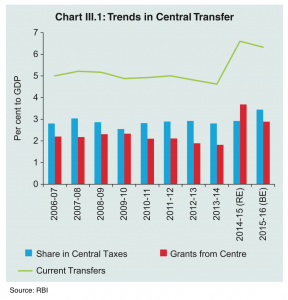 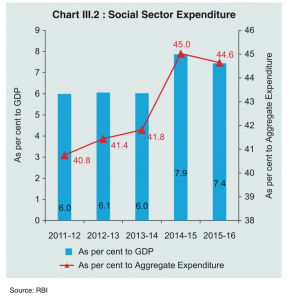 In summary, things do not look good for state-led development. According to the RBI report, the fiscal health of states deteriorated in 2013-14 with their consolidated revenue account turning into a deficit after a gap of three years and the states’ fiscal situation further weakened in 2014-15 with the fiscal deficit growing as a proportion of GDP. It is critical that states increase their focus on creating additional fiscal space by mobilising more revenue and giving priority to development expenditure while economising on non-essential spending. Only then would it be possible to have higher and better quality of growth

In the next post we will look at  the proposed implementation of the UDAY scheme and its bearing on the quality of states’ expenditure in the medium- term.