What are the trends in Indian Real Estate?

The HPI data is cumulative and so we used the data to calculate the year on year (YoY) change in the index over time. 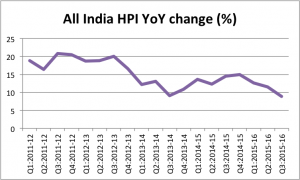 Broadly we see that prices have been cooling off across India. However it is important to note that even though we are far away from the the massive increases of approximately 20 per cent per annum that we saw in 2011-2013, real estate has still not seen an actual fall in prices. The trend is still positive, although it is increasing at a lower rate.

The trend is more pronounced in major cities where prices had been driven more by investment than by end-user demand, particularly in Mumbai, Delhi and Bangalore. 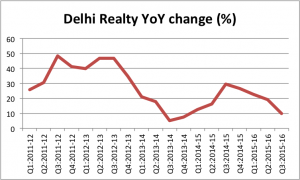 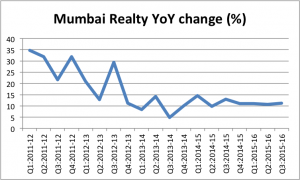 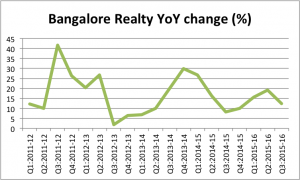 Other major metros also saw a downward trend but the price change was more erratic. An example of this is Chennai, which saw an initial uptrend till Q1 2014-15 but then followed the others in the downward trend in prices. 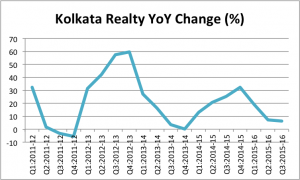 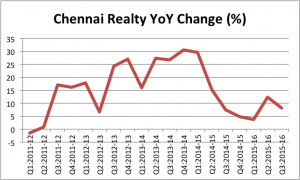 Before we infer anything from the trends in the charts above, we need to examine how this data was calculated and more importantly where the shortcomings of the data lie.

The Reserve Bank’s HPI uses the data on transacted houses at the point of registration for respective state governments. In essence, the data only captures prices relating to those houses sold during a period and is not relevant to all houses in the economy. This also means that the data only captures “official” sales prices and that the black component of the transaction will not be reflected. However it is probably true that the ratio of “black to white” is roughly constant on average and so the trend line should be more or less the same.

The index is also a weighted average price index. The weights are dependent not only on the average per square meter price for small, medium and large houses, but also on the number of transactions in a ward relative to the total in a city. Being a weighted average means that certain micro-markets may not reflect the overall trend in the city. For example, the suburbs of Mumbai may see much larger changes in prices than in South Mumbai but it would not show in the data.

Finally, due to the black money component in these transaction, we must account for the fact that an increase in ready-reckoner rates by the government will show an increase in sale price of a flat even if the total cost of the flat to the end user is still the same. This means that the actual increase year on year would be shifted down in each city. To verify this, we take a look at data from Mumbai in the last year. The city’s HPI last year increased by roughly 11% and, according to Colliers India, ready reckoner rates in the same period increased by around 7%. This approximately matches data by Jones Lang Lasalle that estimate Mumbai prices increased by approximately 3.3% in the same period.

In sum, this data must be taken with a large dose of salt. We cannot really look at the HPI data and reliably assign a numerical value to changes in house prices. However this data is good at showing us the overall trend in real estate which is down.  The real estate sector may be going through a protracted time-correction rather than a sharp price correction.

1 thought on “What are the trends in Indian Real Estate?”