We take a look at various asset classes and their performance in the month of April. In particular, we examine returns of equities, debt, gold, oil and the Indian rupee. 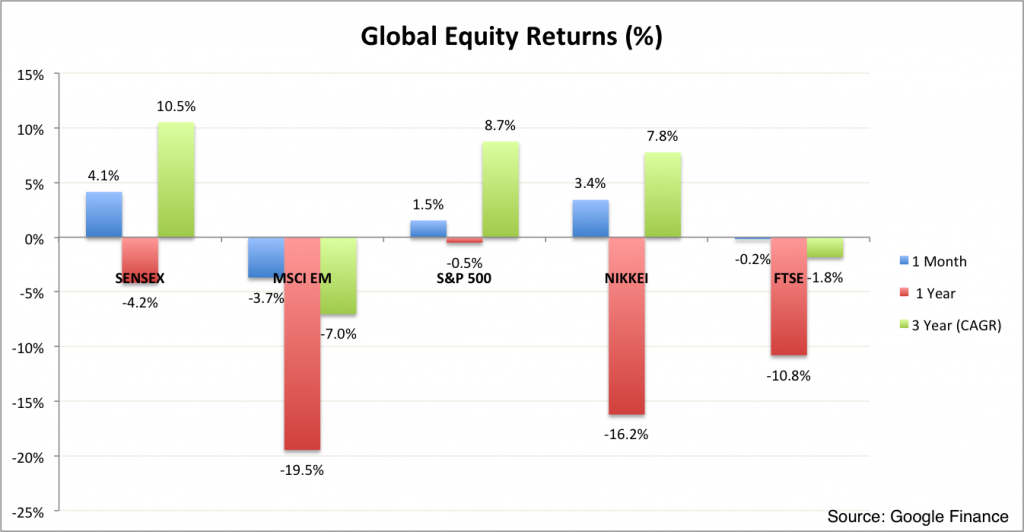 The Sensex continues to do better than its peers on both a short and a long term basis. In particular you can see that even though the broader emerging market basket has given very poor returns, Indian equities have substantially outperformed on all time frames. This speaks to the confidence that investors have placed in the Modi government and the fact that India is one of the few major economies that are growing at a good pace. Globally, the US markets have done well and Japan has also outperformed inspite of all the pessimism around the Japanese economy. The UK markets have underperformed on all time frames, but that may be due to the uncertainty that the EU referendum is creating. 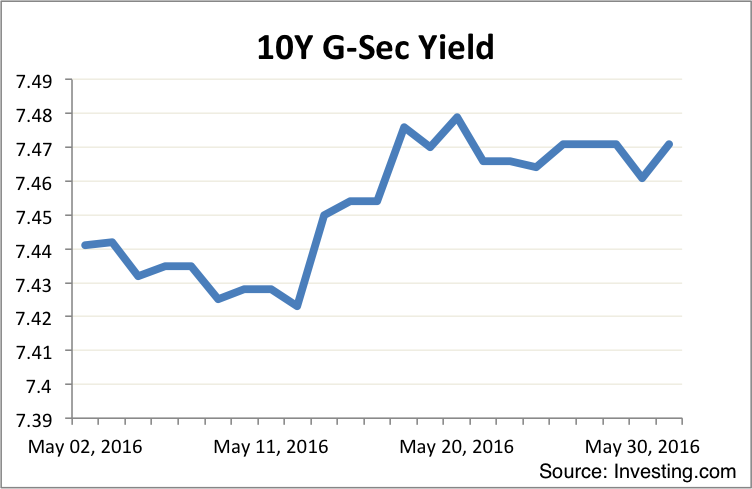 Bond yields continued to move up this month. This is likely due to a number of global and local factors. Globally financial markets are concerned about a Fed rate hike in either June or July. Locally, inflation was higher than expected, with WPI moving into positive territory at 0.34 per cent and CPI, at 5.39 per cent, being higher than the RBI target of 5 per cent. Going forward, the bond markets will look at four things to determine the trajectory of interest rates. The first is the progress of the monsoons and how it would affect consumer inflation.  Second would be cues from the 7th June RBI policy on the liquidity position and the central bank’s view on achieving its inflation target. Third would be the effect of rising oil prices on the Indian economy, both in terms of the affect on the fiscal deficit and on inflation. And fourth on any global events like a Fed rate hike that would cause a spike in US treasury yields. 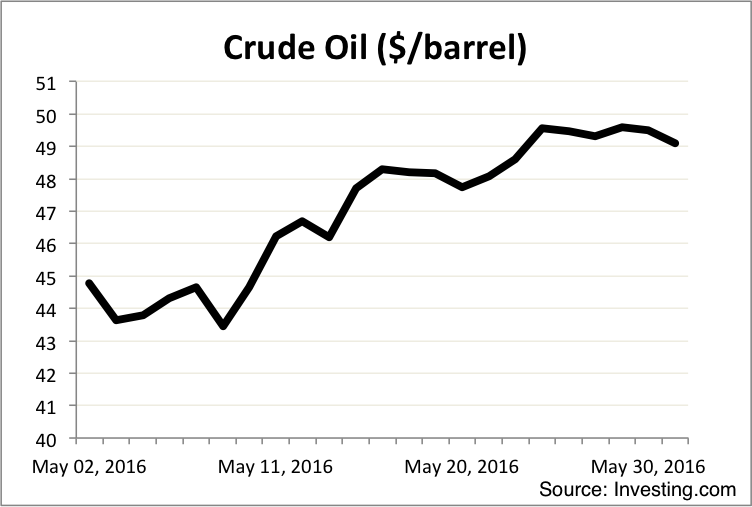 Oil continued its move higher touching 50 dollars a barrel in May. The price plateaued toward the end of the month, but markets will be looking very closely at its trajectory going forward. Being one of our largest imports, oil can have a major impact on the Indian economy.

After touching a high of approximately 1295 dollars per ounce at the beginning of the month, gold has started to correct and has broken the strong upward trend that it has seen over the past few months. It closed the month at roughly the same levels it was at in the beginning of April. This is still much higher than the lows we saw in December of 1050 dollars per ounce. 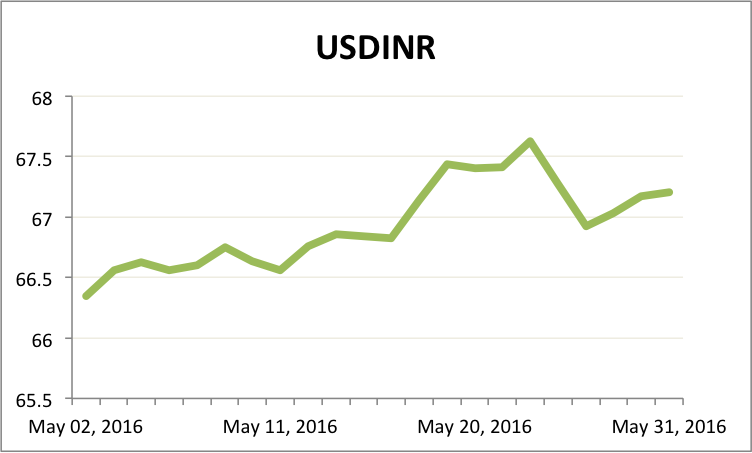 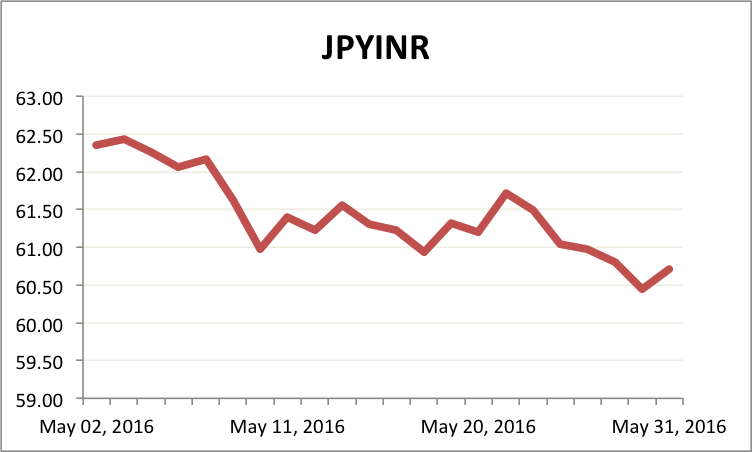 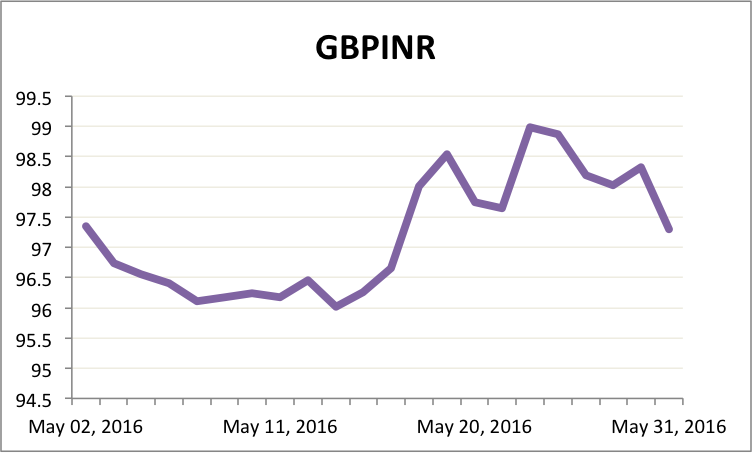 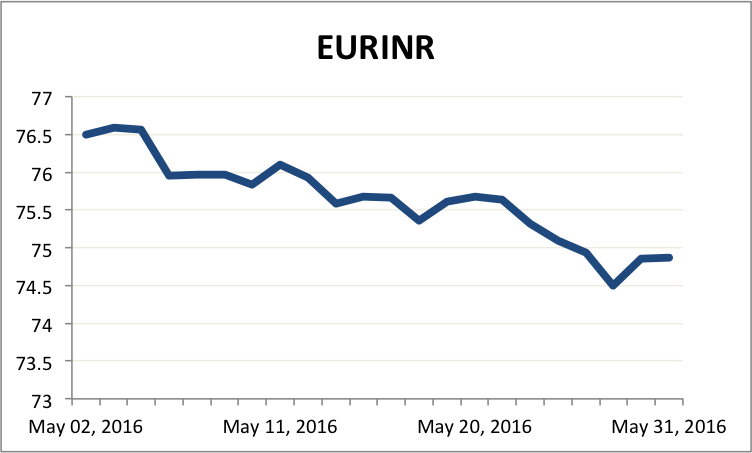 After a flat month in April, the Indian rupee depreciated marginally against the dollar. The rupee appreciated against the Japanese yen and the euro in the month bringing them back to the levels they were at in the beginning of April. The British pound went through a bit of volatility in the month but closed at roughly the same levels that it was at in the beginning of the month.

Equities have done well in May, with the Sensex rallying by approximately 4% on better corporate results and the index has done well even on a longer term basis. The rupee has been relatively stable and changes in the currency seem driven more by changes in global currency pairs than by the strength or weakness of the rupee itself. However bond yields have started moving up indicating that the markets may not be expecting much from the RBI in terms of rate cuts. With oil and other commodity prices moving up there may be concerns on macro stability and so the market will look to the central bank and the monsoons for trends in inflation.