Is the global economy really all gloom and doom?

Financial media tend to paint a very pessimistic picture of the global economy. They cite many factors which suggest that the situation is very bad. Some of these factors include negative interest rates in developed markets, commodity price collapse and low growth in Europe and Japan. The Bank of International Settlements (BIS) in its annual report suggests that the global economy is not doing as bad as rhetoric suggests.

According to the report, growth rates are not that far away from historical averages and in some cases are above estimates of potential. Additionally, even though inflation is below targets in developed economies, it is broadly in line with notions of price stability. 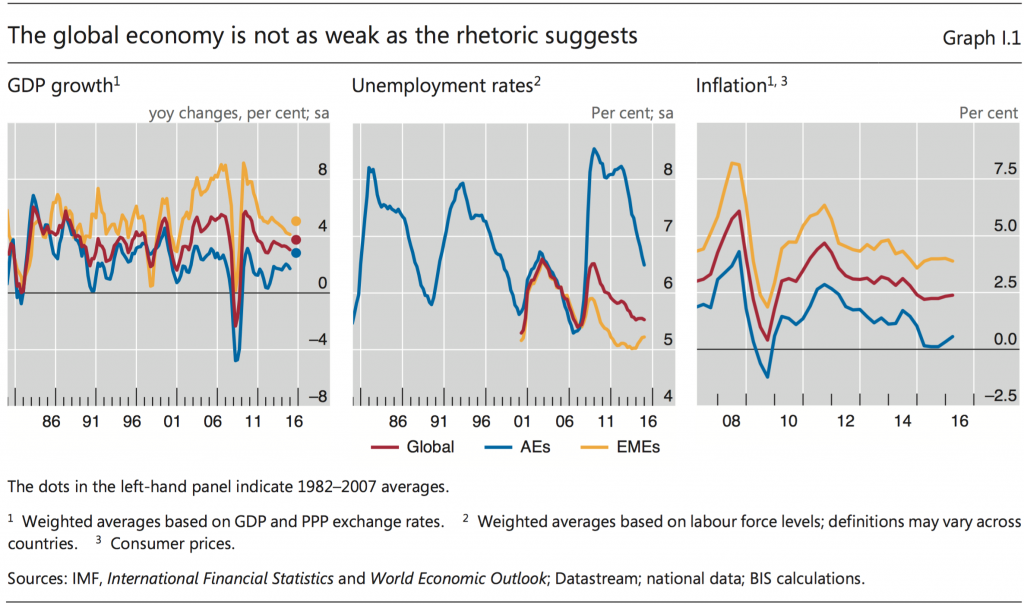 In fact, once adjusted for demographic trends, growth per working age person is even slightly above long-run trends. The structural decline in labour force growth due to demographic factors is reducing potential output growth in almost all countries. The report mentions that this effect is large: while global GDP growth was 0.5 percentage points below its 1987–2007 average in 2015, growth of global GDP per working age person was actually 0.2 percentage points above its average. 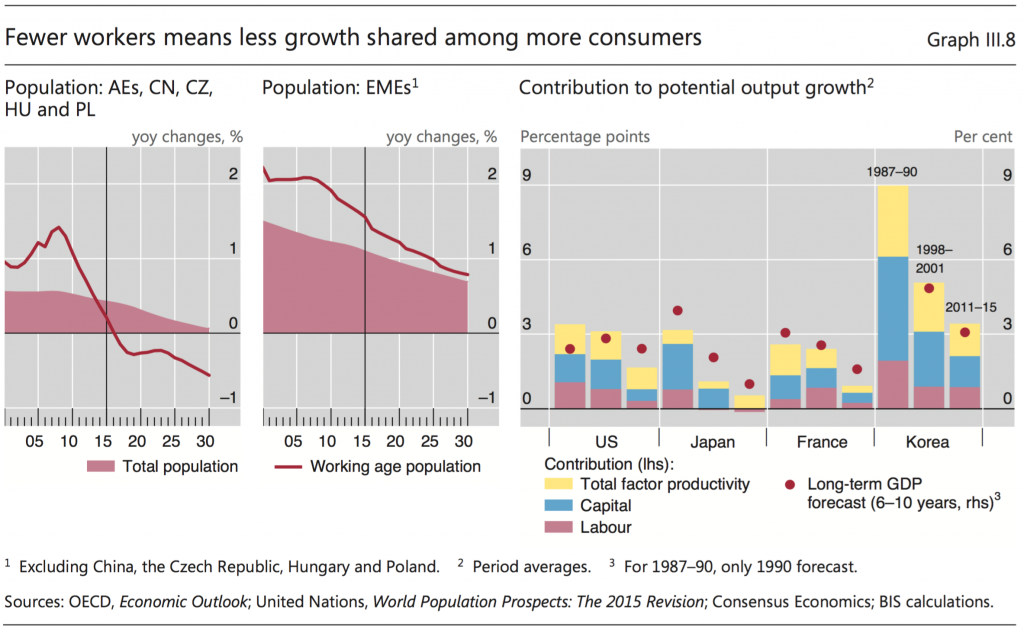 Similarly, unemployment rates have declined, and in some cases are close to historical norms or estimates of full employment. However, improving employment, coupled with low output growth has led to weak productivity growth. As can be seen in the chart below, productivity growth is low and has continued its long term decline. The BIS paper has identified low productivity as one of the three main risks to the global economy. 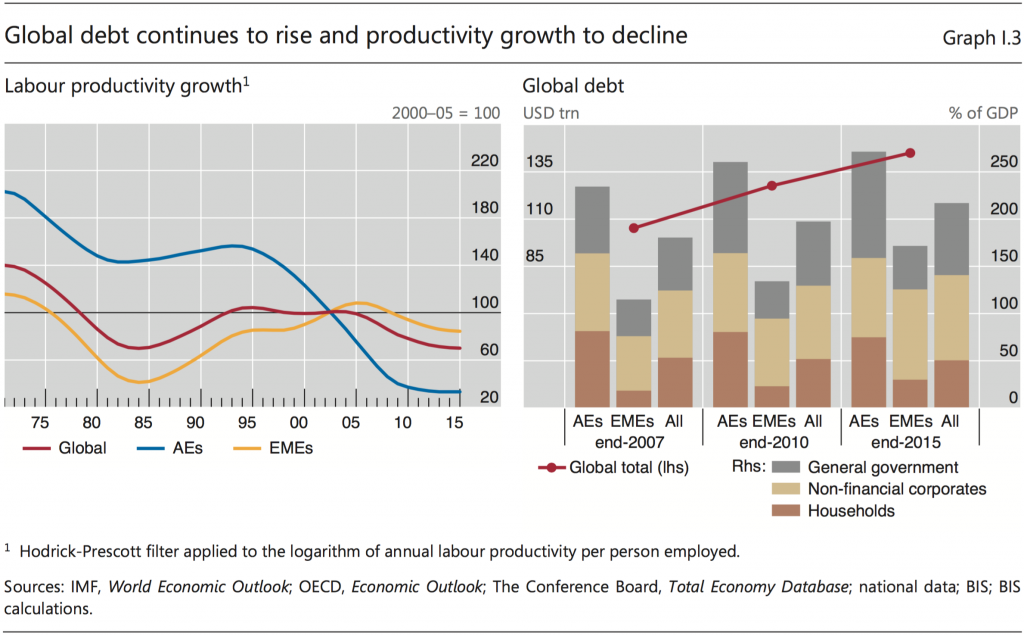 This brings us to the second risk; global debt to GDP continues to increase. We see that the stabilisation in private sector debt has been offset by an increase in public sector debt over the last few years leading to an overall increase in debt levels. The current exceptionally easy financial conditions can create incentives for banks to evergreen loans, keeping otherwise unproductive firms alive. Those conditions may be detrimental to a swift reallocation of capital and labour, and distort competition across the economy, further lowering productivity growth. 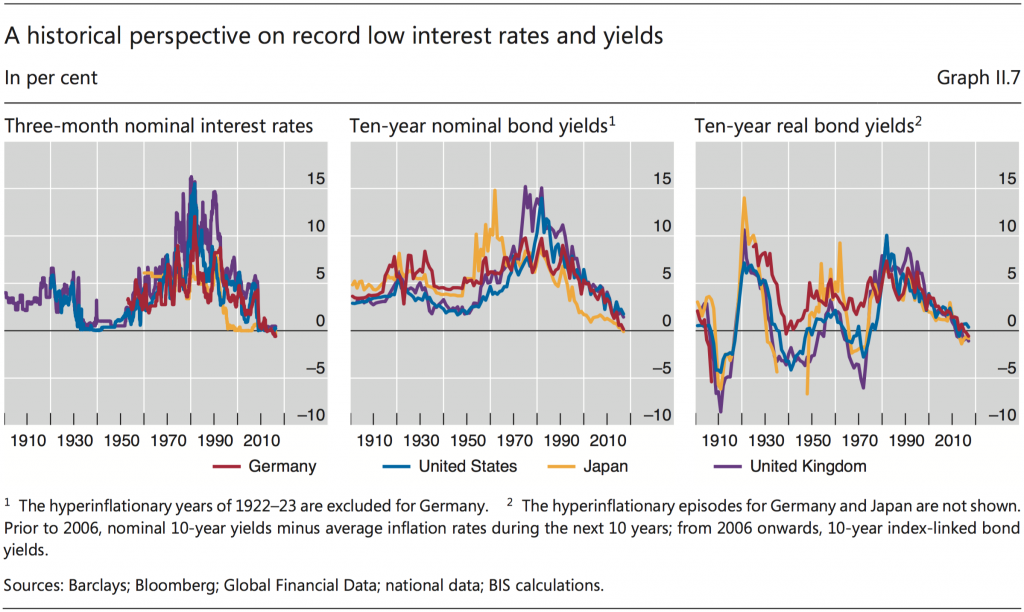 The third main risk that the BIS paper has identified is that the scope for monetary policy manoeuvre is very limited. The most visible sign of this is the persistently low interest rate environment. In fact a large part of the developed economies long term bonds are in negative territory. Such low rates are historically unprecedented. They tell us that despite huge intervention by central banks, inflation remains low and output growth is disappointing.

Markets and the public at large have come to expect the central banks to manage the economy, restore full employment, ensure strong growth, preserve price stability and fool-proof the financial system. This seems to be something that central banks cannot deliver in isolation. A  greater realism about what they can and cannot achieve is needed. Without that, their efforts are not likely to succeed in the longer run.

The global economy is still showing the economic scars of the financial crisis with debt acting as a political and social substitute for income growth. Judged by historical standards, the global economy is not as bad as financial media makes it out to be in terms of output, employment and inflation. However a shift to a more balanced and sustainable recovery is threatened by three main risks: debt levels are too high, productivity growth is too low, and room for policy manoeuvre is too narrow. A shift is required toward more prudential, fiscal and structural policies. These measures must avoid quick fixes and instead have a long term orientation so as to put the global economy on a stronger and more sustainable footing.