How are Indians spending their money?

The National Sample Survey Office (NSSO) of the government has released data that outlines key indicators of Indian household expenditure on goods and services. We take a look at this data to identify trends in Indian spending in both rural and urban areas.

Top 3 Services that Indians spend on 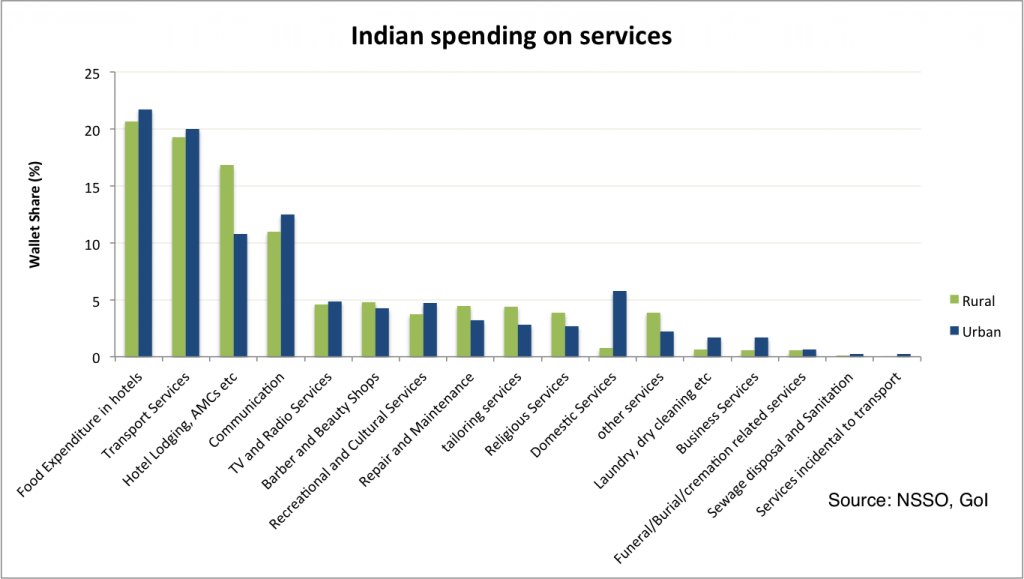 Eating out: With more than 20 per cent of wallet share in both urban and rural areas, Indians are spending a large amount of money on food in restaurants, dhabas and hotels

Travel: The survey doesn’t not distinguish between travel for leisure and travel for daily commute. Nevertheless, transport services form a large part of the Indian wallet, mainly by bus/tram travel, followed by rail and then auto-rickshaws.

Mobile, TV and internet bills: Spending on communications and TV takes up over 15 per cent of the consumers wallet. With rapid adoption of smartphones, we are seeing more spending on mobile bills as consumers start taking on internet plans. Similarly the push for digitisation in TV has also increased the cost of this service.

The biggest difference between Urban and Rural spending is on domestic services, with a gap of roughly 5 per cent. One explanation of this phenomenon is that families in urban India are increasingly becoming nuclear and women are also starting to work in those households which has led to higher demand for maid services in cities. Urban Indians also tend to spend more on laundry services, recreational services and business services. Rural Indians on the other hand spend more on religious services, tailoring services and repair and maintenance compared to their urban peers. 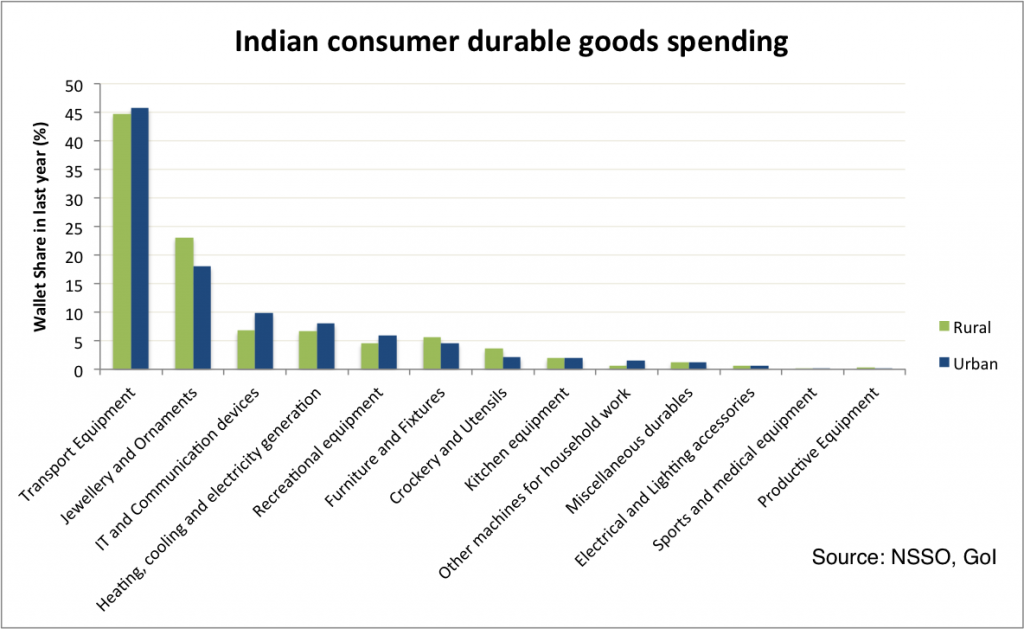 Vehicles: This was a very surprising statistic! Indians, both rural and urban, spend almost 45 per cent of their wallet share on cars, bikes, tractors etc. This probably has a lot to do with the fact that the value of these goods is also high, but it also shows the aspiration of the Indian consumer to own a car or bike.

Jewellery: Indians have a strong preference for physical assets and this shows with this being the second highest share of expenditure.  Rural India spends roughly 23 per cent on jewellery and ornaments, which is higher than urban India’s spend of approximately 18 per cent.

Mobile Phones: Finally, Indians love their smartphones, with IT and communications being the third highest spend in consumer goods.

The survey paints a picture of an increasingly aspirational society, with Indians spending more on eating out, on mobile phones, on automobiles and on jewellery. Urban India spends much more than rural India on services, especially on domestic help, to try and improve their quality of life. These trends are likely to accelerate with increasing urbanisation and as more of our population comes into the middle class.

2 thoughts on “How are Indians spending their money?”