Who is benefitting from the bad loans crisis?

Every crisis presents opportunities. We find that Indian private sector banks are taking full advantage of the bad loans problem and are taking a sizeable share of the market from public sector banks, scheduled commercial banks and even foreign banks.

RBI’s Financial Stability Report has a few interesting charts that demonstrate this change in the banking sector. 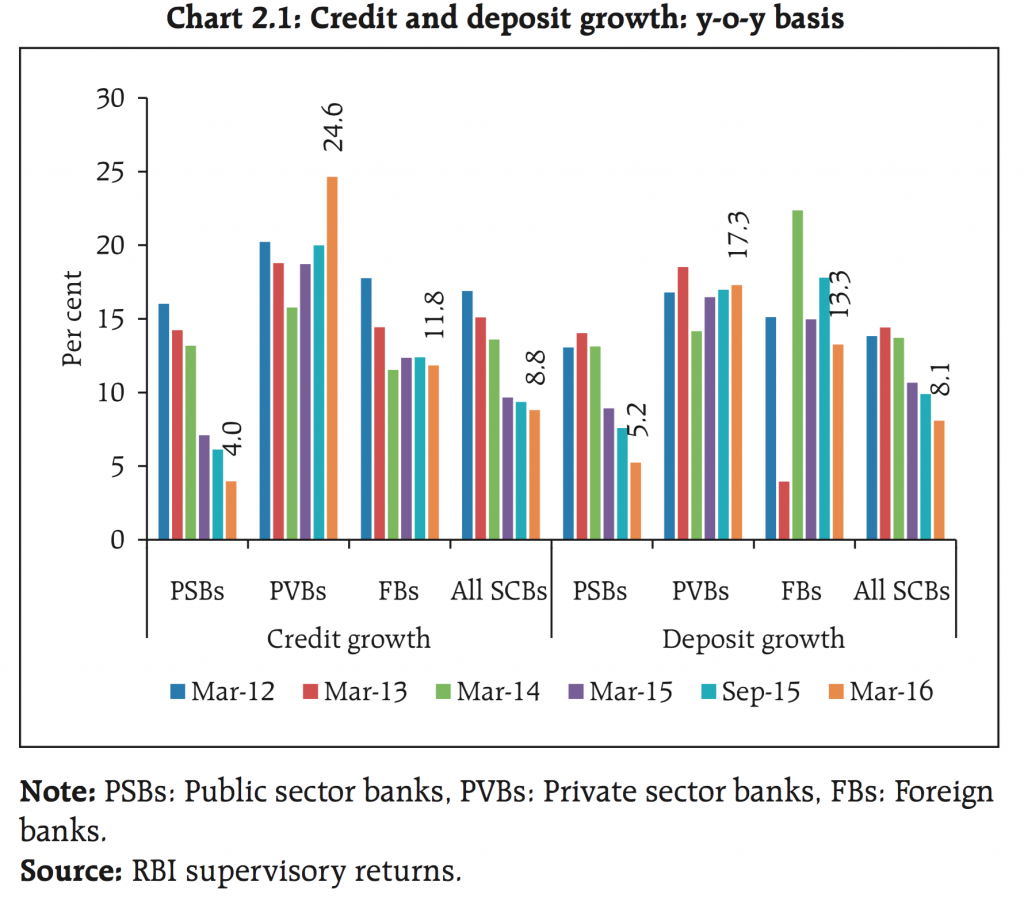 Across India, the average credit and deposit growth has been under 10 per cent. It is thus extremely impressive to see that private sector banks’ credit growth has hit almost 25 per cent in March 2016, accelerating the pace of growth over the last few years. Private banks (PVBs) are also the only ones that are increasing the rate of deposit growth year on year to a little over 17 per cent in March 2016. This growth has come at the expense of public sector banks (PSBs) and scheduled commercial banks (SCBs) whose credit and deposit growth are now in single digits. Foreign banks are also showing lower deposit and credit growth with many exiting the Indian banking space altogether.

In terms of asset quality we see that private banks have kept their bad loans in check meaning that the quality of their growth is superior. PSBs are saddled with many bad loans of the past which has resulted in them being unwilling to give out fresh credit. They also have poor governance structures, low capital adequacy and have not invested enough in technology. This gives the advantage to the private banks who can provide better service at a lower cost with fewer hassles to the consumer.

NBFCs also continue to do well. The aggregated balance sheet of the NBFC sector expanded by a little over 15 per cent on a y-o-y basis in March 2016. Loans and advances increased by more than 16 per cent, while, total borrowings increased by over 15 per cent. The regulatory norms of NBFCs are closer to SCBs and their performance is much better than them.

It is clear that private banks, and to some extent NBFCs, are taking market share away from their public sector peers. PSBs and SCBs are burdened by bad loans which are unlikely to go away anytime soon. This makes them more risk averse and will prevent them from growing aggressively in the future. On the other hand the private sector is not weighed down as much by these problems and have more customer-friendly operations. It is but natural that they will do well in the years to come.