Will the FED raise rates in a negative yield world?

At the Jackson Hole economic symposium, Janet Yellen said: “the case for an increase in the federal funds rate has strengthened in recent months”. This was based on improvement in the labour market and on the economic outlook for the domestic economy. But the US economy cannot be looked at in isolation and it may be harder for the FED to raise rates when much of the developed world is struggling with negative yields.

According to the FED, the US economy continues to grow, led by strong household spending. And while this growth is not as high as it was in the past, it is sufficient to generate an improvement in the labor market. However business investment in the US is low and exports continue to disappoint due to slow global demand and the dollar appreciating strongly over the last few years.

With moderate growth and a strengthening labor market, the FOMC expects inflation to rise to the target level of 2 per cent over the next few years. It is on this basis that Yellen has made the case that interest rates may rise in the near term.

Unfortunately the FED chair also hedged this statement by saying that the FED rate will evolve over time because monetary policy will need to adjust to “whatever disturbances may buffet the economy“. The underlying cause of these “disturbances” were not mentioned, but given that the entire speech was about expanding the policy toolkit, it is likely that the FED was keeping in mind the accommodative monetary policy stance of other major central banks.

Over the last few years, we have seen sovereign bond yields fall globally due to strongly accommodative monetary policy. In fact a large chunk of major government sovereigns now trade at negative yields. This pie chart from Nomura shows us that out of 42.2 trillion dollars of outstanding government debt, roughly 14.8 trillion is trading at negative yields. 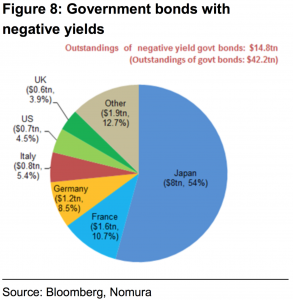 An overwhelming 54 per cent of these negative-trading bonds are from Japan. Consequently, according to the Nomura report, a large amount of money that had been invested in Japanese government bonds is now moving into US Treasuries and sovereign debt of major developed markets.  Sovereign bond yields have fallen across the board as investors look not only for yield, but also for large liquid markets that can absorb the these flows. 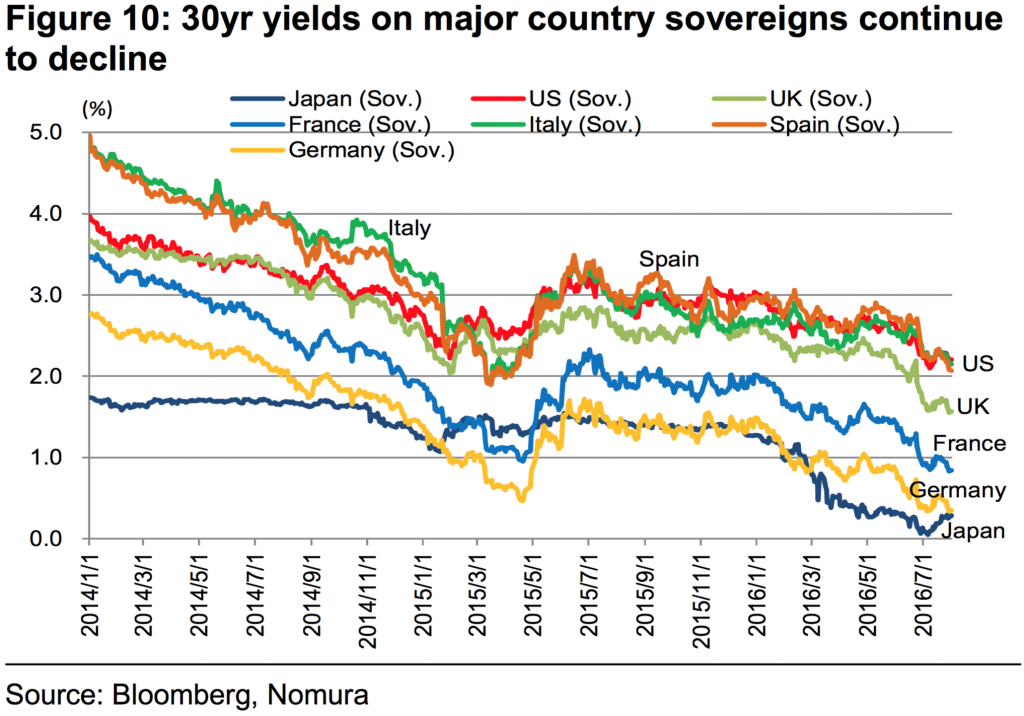 It is unlikely that major central banks are going to move away from their current monetary policies. Brexit coupled with slow growth in Europe and Japan mean that the Bank of England, the ECB and the BOJ are likely to continue remain accommodative. As a result, the dwindling of supply of sovereign assets that are “safe” with positive yield is likely to continue. According to Nomura, the US Treasury, being one of the last few markets which still has positive bond yields is likely to get a lot of these flows and they predict that US yields are likely to go down even further, possibly with the 30-year treasury yield going to zero! 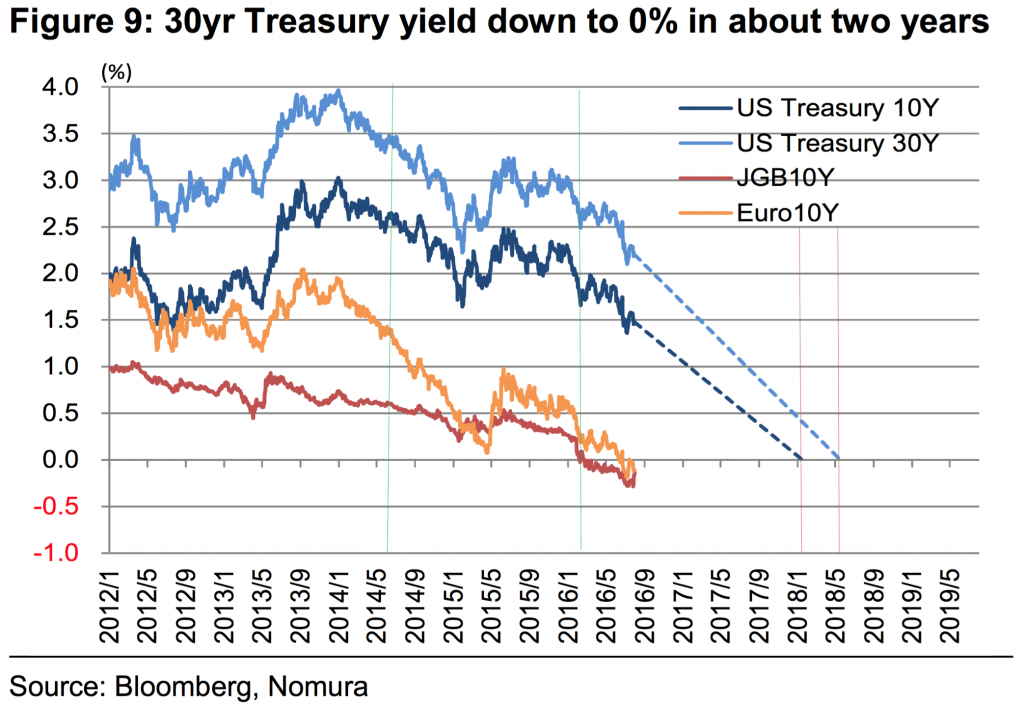 Keeping in mind the global search for yield, it is surprising that Yellen’s speech did not find one mention of negative bond yields across the globe. Any move by the FED to raise rates would likely accelerate the flows into US Treasuries and cause the dollar to appreciate. This in turn could lead to a slowing US exports and could stall growth in the economy.

Yellen did state that future policy makers could look at additional tools which are currently being used by other central banks such as purchase of a broader range of assets. Such tools could be used by the FED in the future in the event that they needed to be even more accommodative than the current tools allow. This does not mean that the central bank would be more accommodative now. But it suggests that in case any “disruptions buffet the economy”, as Yellen alluded to in her speech, the FED would be willing to use more aggressive policies to ensure that its objectives are met.

Despite repeated intentions to raise rates again, FED officials have not hiked rates at all five meetings this year. According to Bloomberg, futures markets have priced in a 30 per cent chance of another hike at the September meeting. We think it will be difficult for the FED to raise rates given the global context. And even if they do, the increase will likely be marginal and not as aggressive as markets had predicted earlier.