We take a look at various asset classes in our monthly market summary and find that Indian equities have outperformed its peers on both a short and long-term basis and that debt markets have rallied sharply as well. We also look at returns of gold, crude oil and the Indian rupee. 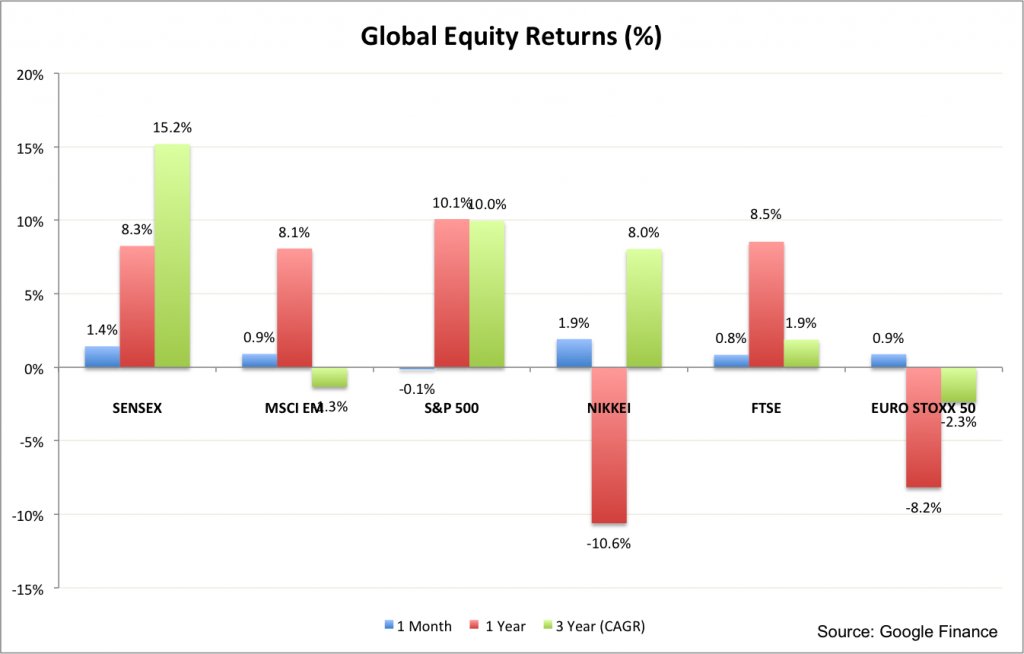 Indian equities continues to be the best performing asset class on both a short and a long term basis. On a 3-year basis, the CAGR of the Sensex is a little over 15 per cent which is far ahead of both its emerging and developed market peers. On a one year basis it has performed roughly in-line with its emerging market peers at about 8 per cent. However, Indian equities are now showing signs of the market being expensive (as seen in our equity valuations post). Given this, it would be prudent to temper expectations of getting such high returns going forward.

Most other equities have also done well, with the Nikkei, FTSE and EM showing positive returns due to a rally in their respective markets over the last few months. And the US continues to show positive returns on both a short and a long term basis. 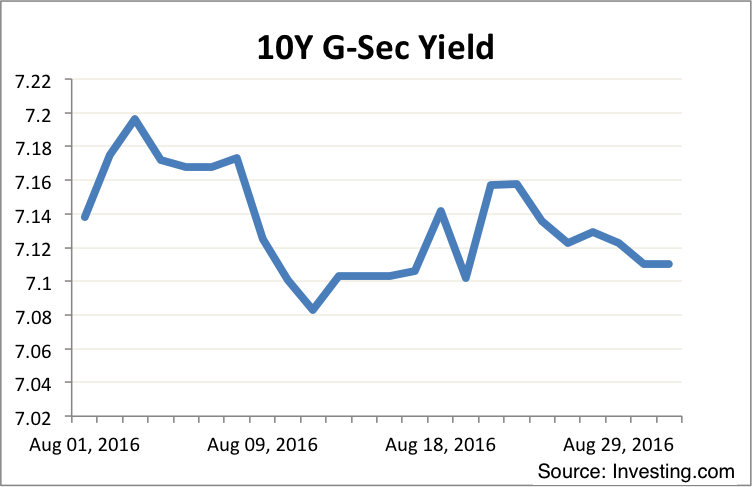 At the end of June, the 10 year g-sec yield was trading at roughly 7.45 per cent. In spite of a higher inflation print last month, the 10 year bond has rallied sharply over the last two months to roughly 7.11 per cent. We see three factors that have influenced the rise in the g-sec market.

First, “Brexit” has raised expectations of easing by developed market central banks causing a global chase for yields. Second, “Rexit” triggered expectations of a more dovish governor which caused a rally in yields. And finally, the move by RBI to increase liquidity in debt markets has led to renewed interest in buying from debt market participants.

It is likely that the RBI’s new liquidity stance together with a global chase for yield will cause g-sec yields to continue to drift lower. The question of a rate cut depends on the progress of inflation over the next few months. While inflation was higher than the target in the last month, a good monsoon could mean that it could drift lower and stay within the comfort range of the RBI. 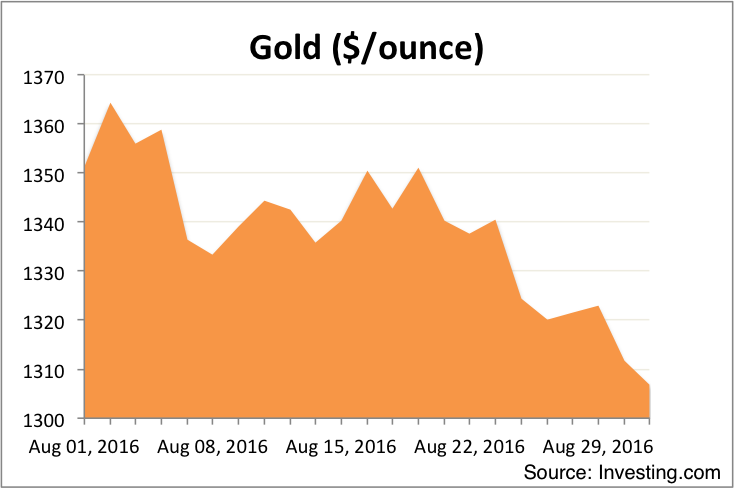 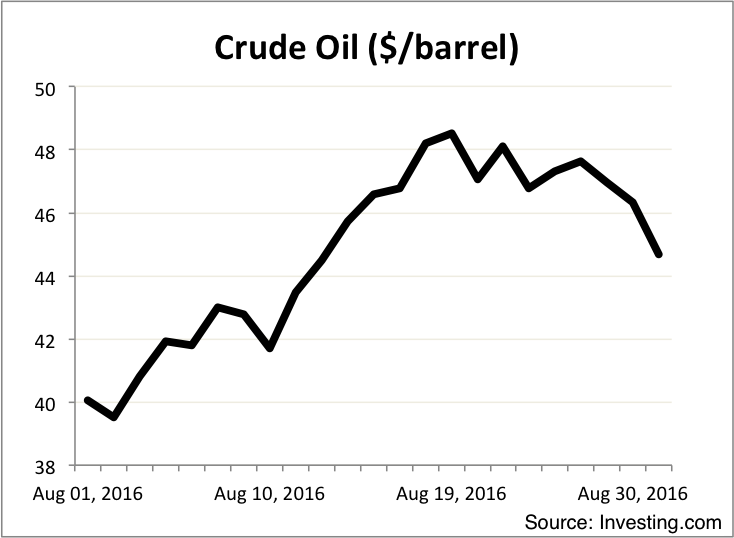 Similar to gold, oil has stayed in a range between 40-50 dollars a barrel after rallying sharply at the beginning of the year. While it is difficult to predict the price trend of these commodities, it is important to keep an eye on them because they form a large portion of India’s import bill. Any strong moves in these commodities could affect our economy’s fiscal stability. 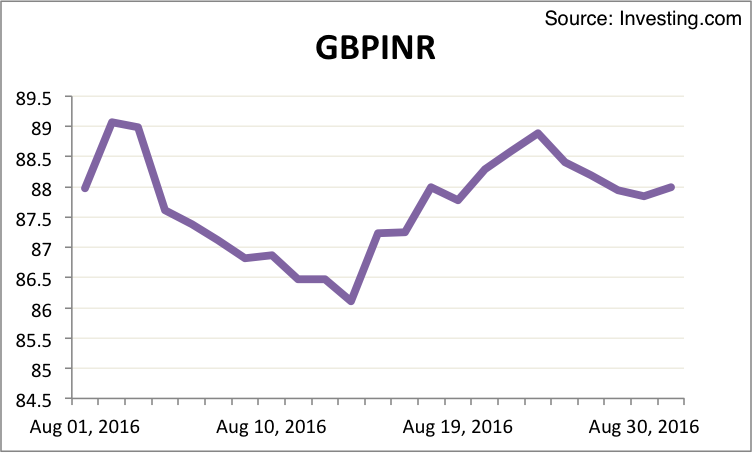 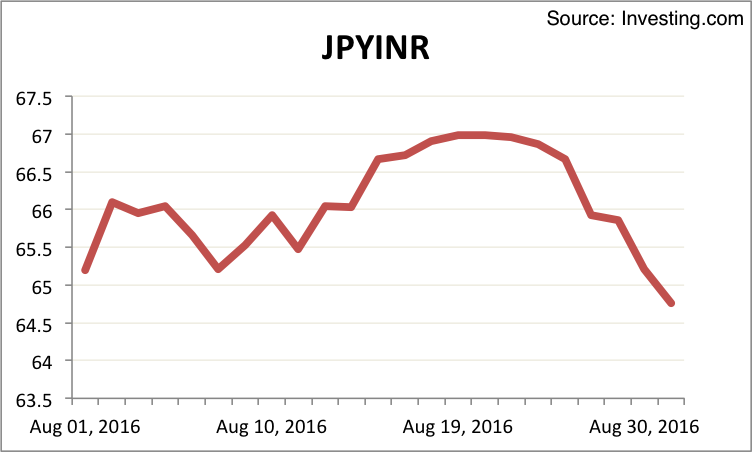 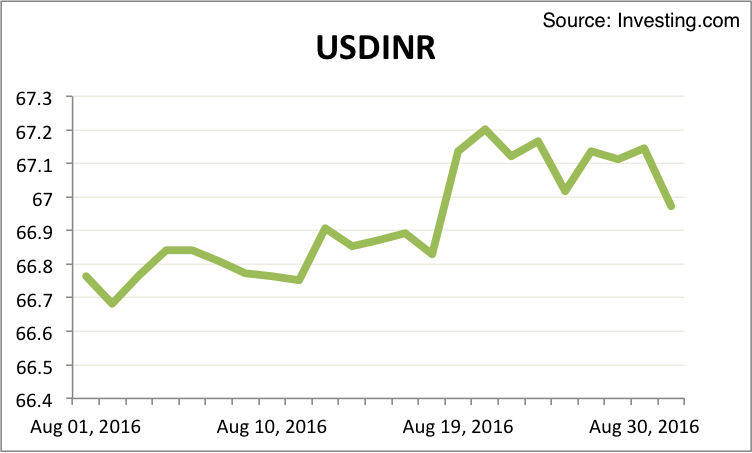 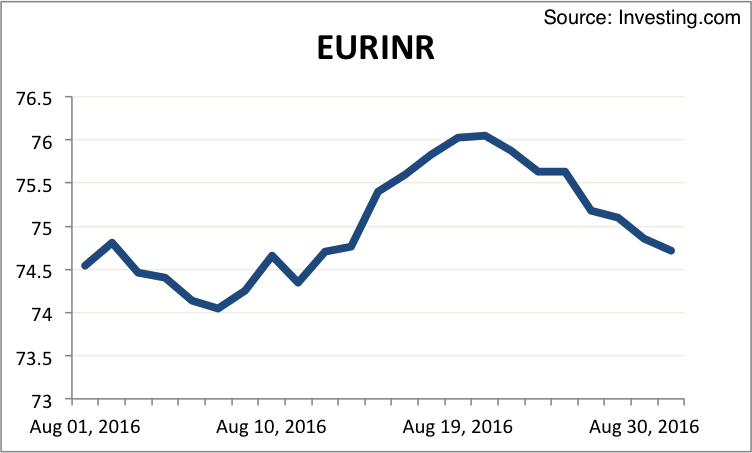 After a volatile June due to Brexit, the Indian rupee has remained relatively stable. The Rupee has traded in roughly the same range across major currencies in the month of August.

Indian markets have done well in August both on the equity and the fixed income side. The Indian equity markets continues to be one of the best performing markets across the globe on both a short and long term basis. This speaks to the confidence investors have in the Indian economy over the past few years. But with valuations now being high, it may be difficult for future returns to match past performance. The only way this is possible is if earnings of the underlying companies expand over the next few quarters. The hope is that a good monsoon and the reform and development push of the government will help kick start the economy which is currently only being driven by consumption. We will have to wait and see if such expectations are met.

The steps made by the RBI to open up the corporate bond markets has increased interest in this space. When you add this to the new liquidity stance of the central bank as well as the global chase for yields, you find that the case for a further fall in yields is strong. This would be the case even if RBI does not cuts rates. The key thing to watch out for is the trajectory of inflation going forward. If inflation does not follow the expected glide path, we may find a pause, if not a reversal, in the RBI’s outlook on lower rates as it tries to adhere to its mandate of low and stable inflation.