The next decade of Indian GDP growth

Ambit Capital has come out with a great report on the next decade of Indian GDP growth. The report is written with the goal of identifying changes in the Sensex over the next few years, but we like it because it presents the structural drivers of the economy over the next ten years. We have summarised some of these trends in this post.

The drivers of Indian GDP growth

GDP growth can be attributed to 3 main factors. The first is labour, which we have an abundance of as a young economy. When the number of people employed goes up in an economy, output increases.

The second factor is capital accumulation. As a country gets richer, an increase in savings leads to an increase in capital which in turn raises output levels and causes growth. Even though investments have slowed in the last few years, the rate of gross fixed capital formation in India is still high at 30 per cent.

The third is total factor productivity. This is a measure of the efficiency with which labour and capital are deployed. Often innovation and improved organisation structure help to improve productivity and thus drive GDP growth. 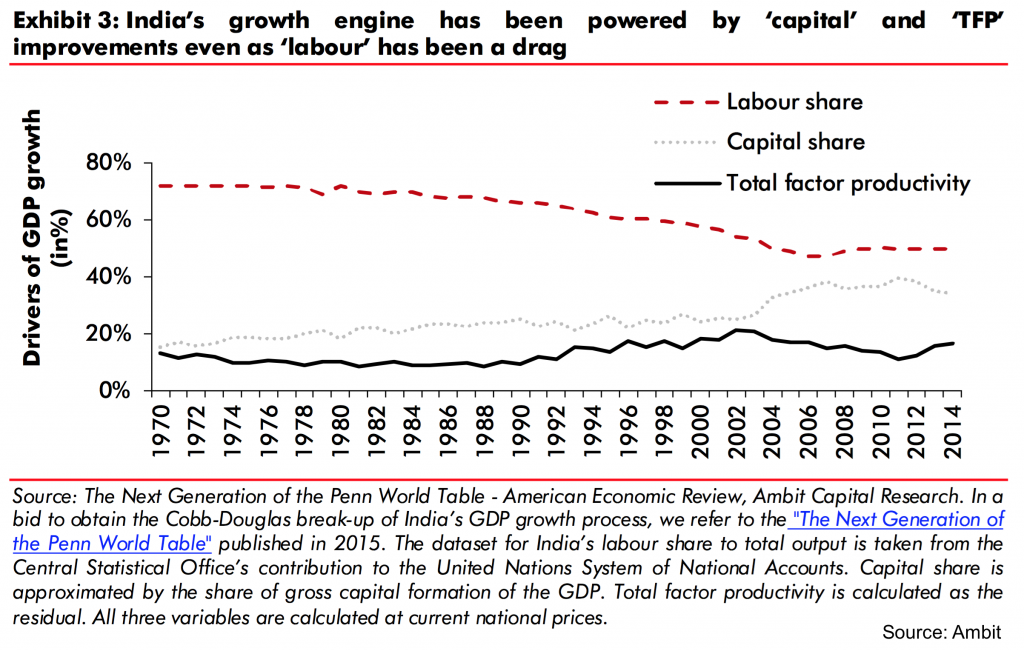 We can see from Exhibit 3 above that the drivers of GDP growth have changed over the last few decades. Even though India has a very young population, the contribution of labour to GDP has been on the decline. We have seen a lot of reforms since the seventies that have gradually opened up the Indian economy. These reforms made access to foreign capital and technology much easier and privatisation helped many firms take advantage. As a result, the efficiency of capital and technology improved and they started to increasingly drive the Indian growth story.

Unfortunately, labour productivity was not able to grow at the same place. The demographic boom has massively increased the supply of labour, leading to low wages. The state has also failed to provide adequate education and healthcare to the public leading to low productivity of workers. This is why, in spite of the world talking about India’s demographic boom, the contribution of labour to our country’s economy has been on the decline. 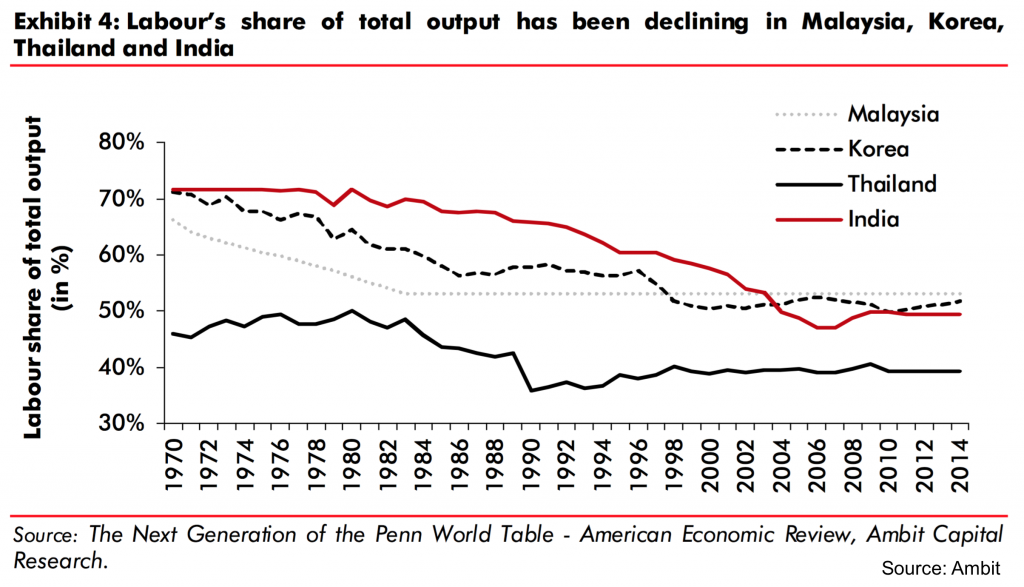 The Ambit report then goes on to look for countries that have had similar growth characteristics to India. The report found that Malaysia, Korea, Thailand, Mexico and Turkey are countries that are driven by a declining share of labour and are not commodity driven. By comparing India to the growth of these countries, we can look for common trends that will drive our economy over the next decade.

The Ambit report started by looking at how other countries grew over the years from the same per capita income that India is at today i.e. approximately 1500 dollars per person.  This is what they found: 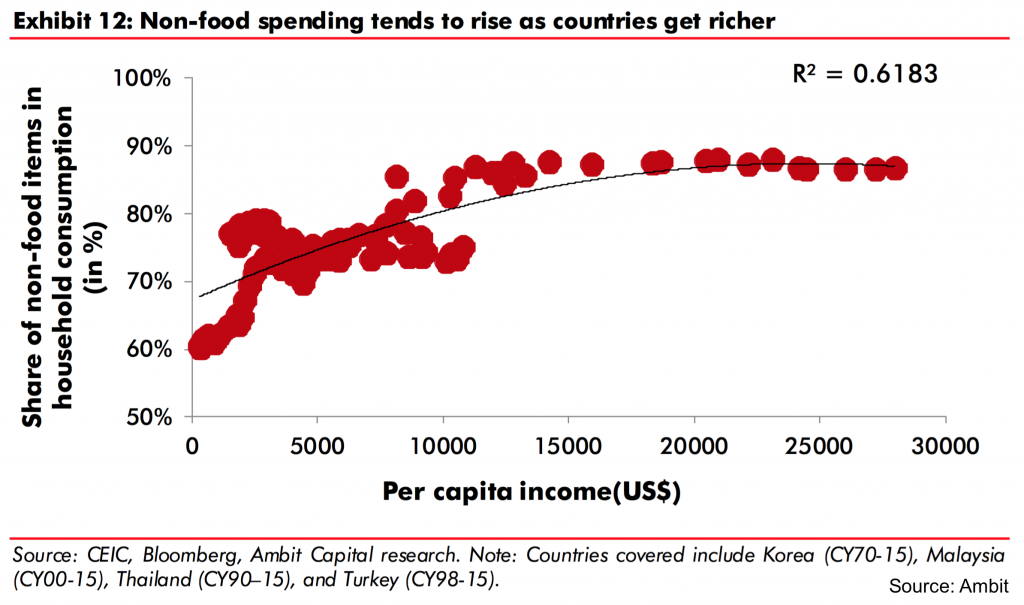 As people get richer, the share of spending on discretionary items starts to rise. In fact, this effect is most pronounced in the automobile sector. But you also see a rise in purchases of clothing and footwear, furnishings, hotels, restaurants, recreation and cultural services

2) The wallet share of consumer staples starts to fall

Naturally, as consumer discretionary starts to rise, the wallet share of food and other staples starts to fall.

3) Spending on services starts to rise 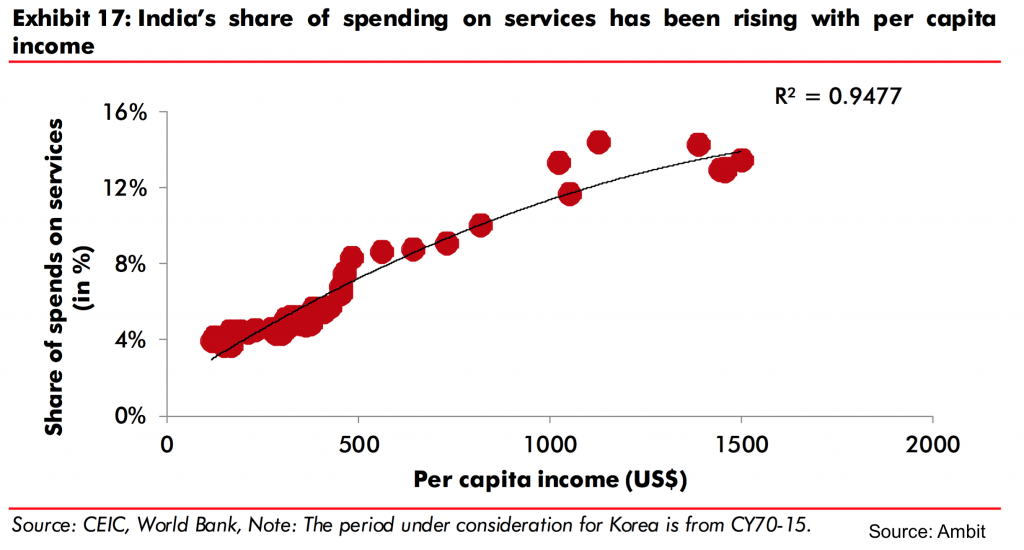 In particular, we see that financial services in other countries sees a huge jump as per capita income increases.

4) Spending on healthcare starts to decline

This one was a bit surprising. You would expect that as the population has more to spend, they would allocate more money to take better care of their health. It turns out that the per capita income is actually too low for this to happen. Healthcare spends start to rise rapidly once a country crosses a per capita income of 10,000 dollars, a level that India is unlikely to reach in the next decade.

The last few decades of Indian GDP growth have been dominated by the basics; consumers have shifted to buying packaged food and consumer staples because they did not have much disposable income. As the average Indian gets richer, the next decade is going to be increasingly dominated by more discretionary spending. Notably, financials and automobiles are likely to gain more prominence with the consumer having more money both to spend and to save. It will be interesting to see how these sectors evolve over the next few years, especially since they are seeing massive disruption. Automobile companies are facing disruptive threats both from ride sharing and from the shift to electric cars; and financials are increasingly seeing disruption caused by the combination of Fintech and aadhar and from changes in regulation to promote more competition.