We take a look at various asset classes in our monthly market summary and find that Indian equities have fallen in the last month and that the British pound is now at 86! We also look at returns of debt, gold, crude oil and the Indian rupee against other currencies. 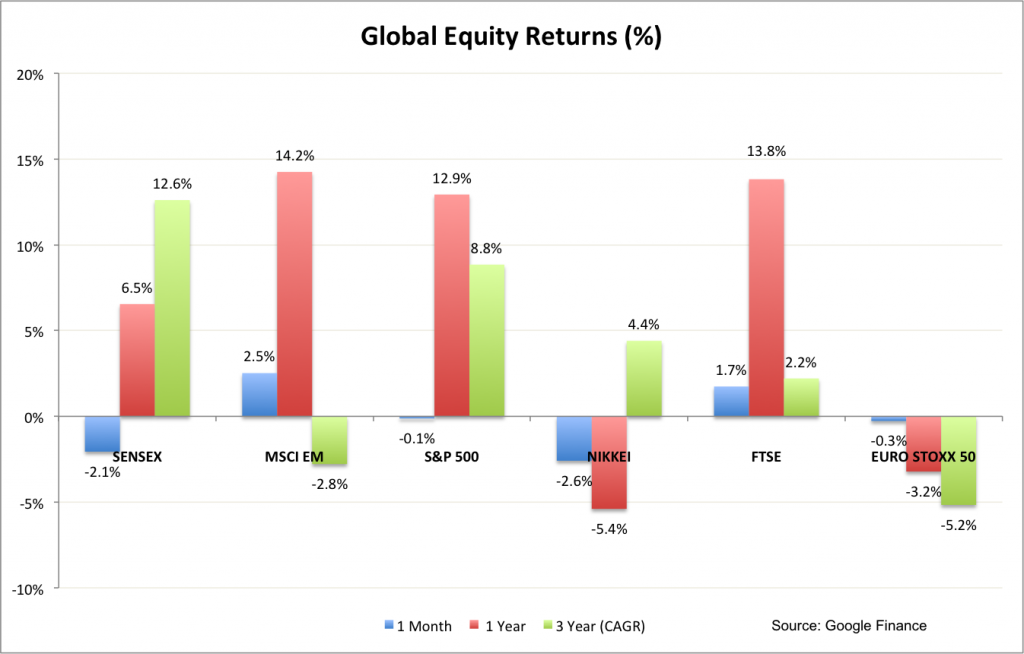 The Sensex fell by 2 per cent in the month of September. The fall could be a reaction to events occuring in Kashmir and due to the fact that Indian equity valuations are expensive. Even though the index has given positive returns on a longer term basis, the broader emerging market basket (MSCI EM) has outperformed in the last year. Foreign investors may be increasing their allocation to emerging markets, but their overweight stance on the Indian economy may be reducing.

Most other global equities have done well on a longer horizon. It is particularly interesting to note that the FTSE (UK) and the S&P 500 have both delivered double digit returns in the last year. The only exception being European equities, with negative returns both in the short and long term. 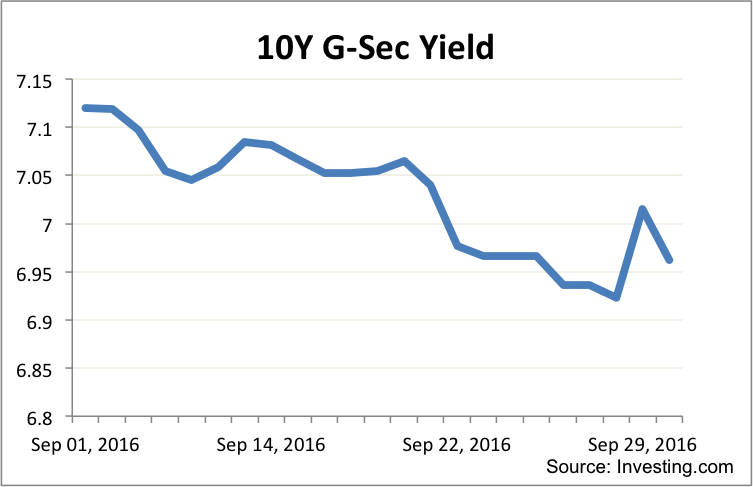 The 10 year g-sec has continued to rally in September. From a value of roughly 7.45 per cent at the end of June, the 10Y is now at approximately 6.96. This means that in the span of three months, Indian bond yields have rallied by about 50 basis points!

The RBI’s new liquidity stance together with a global chase for yield has caused g-secs to continue to drift lower. As these lower yields get transmitted into the Indian economy, corporates are likely to further benefit from lower interest costs.

It must be noted that in the last 3 days of the month, the g-sec yield spiked in reaction to events in Uri. Any escalation of the conflict could spook global fixed income investors causing the yields to rise further. Other factors that could affect Indian bonds could be a change in the trajectory of inflation, a shift in the RBI’s liquidity stance and the views of the new Monetary Policy Committee on interest rates going forward. 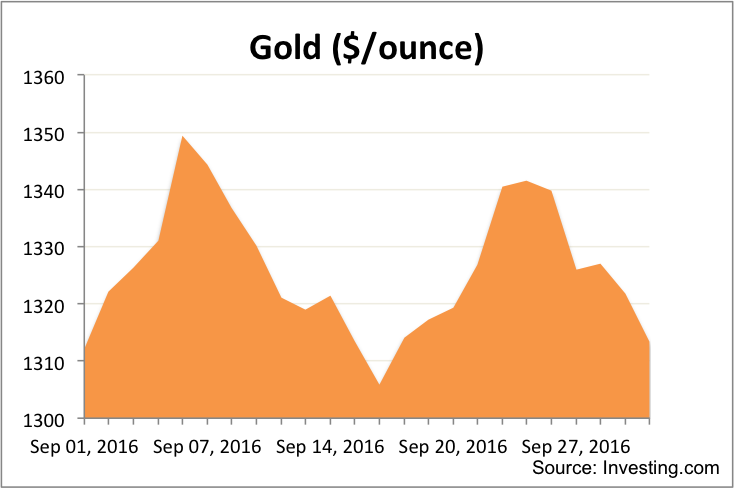 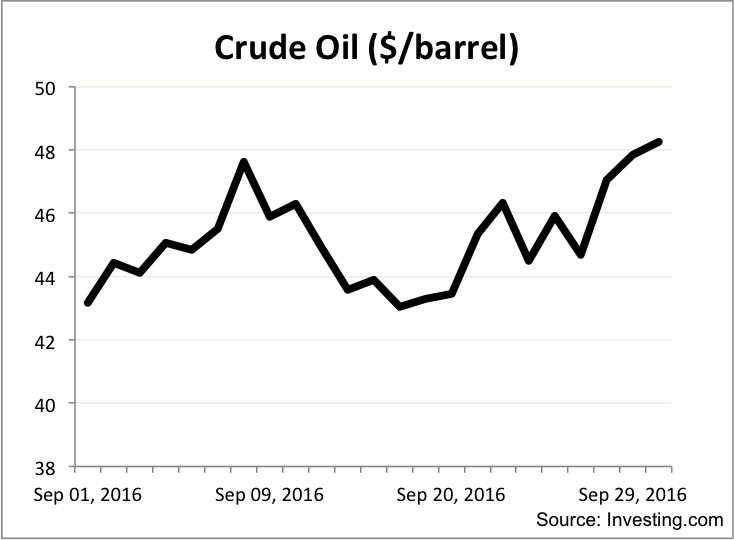 In the last month, OPEC announced plans to cut supply, which caused oil to rally slightly. But crude oil is still within the range of 40-50 dollars a barrel. While it is difficult to predict the price trend of these commodities, it is important to keep an eye on them because they form a large portion of India’s import bill. Any strong moves in these commodities could affect our economy’s fiscal stability. 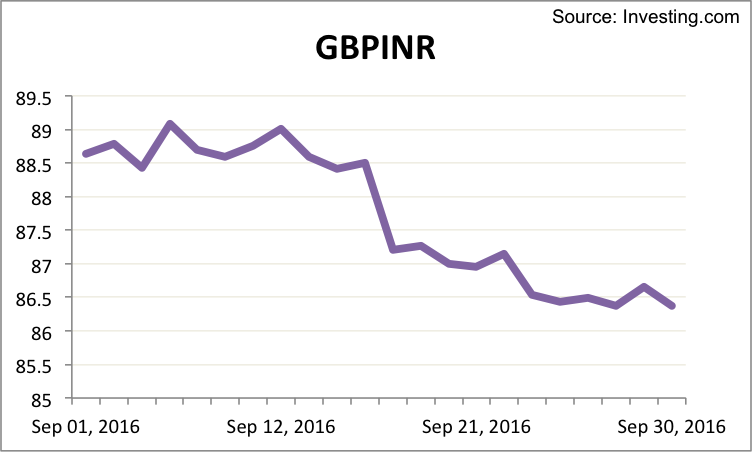 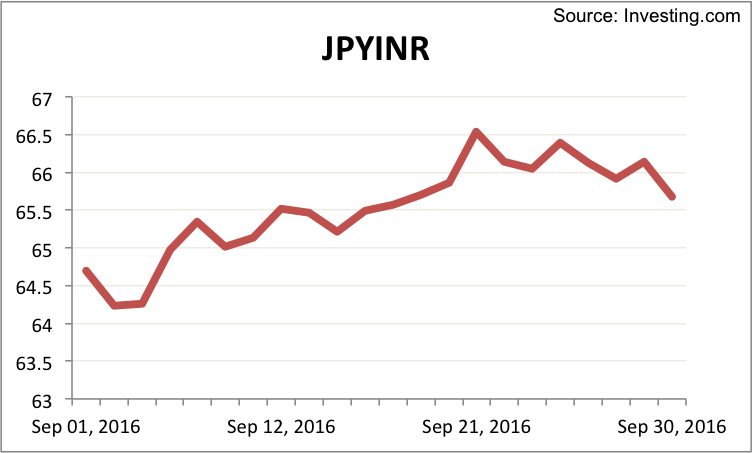 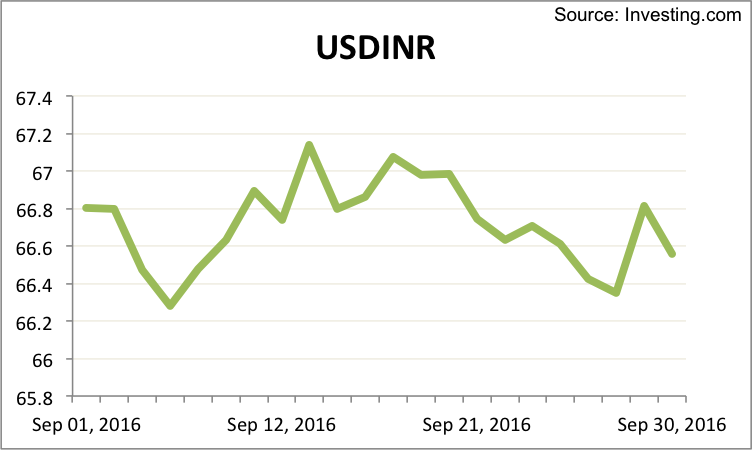 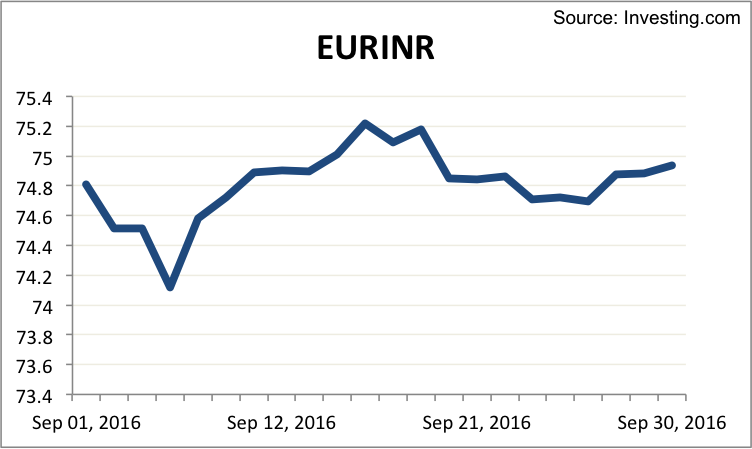 Whilst most other currencies have been roughly stable, the pound has depreciated against the rupee. This is likely due to concerns over Brexit and concerns over a slowing British economy. The Bank of England has already cut rates in August and has committed to further easing in the future. These factors certainly suggest that the pound is unlikely to reverse course anytime soon and may even depreciate further against the rupee.

Indian fixed income markets continue to do extremely well. Falling inflation coupled with good measures from both the RBI and the government to improve the financial markets has led to a rally in yields. Foreign investors have also piled into the debt markets because of strong fundamentals and a global search for yields. The likely trajectory of bond yields going forward will depend on whether the RBI will be able to meet its inflation targets and also would depend on policy actions of the new monetary policy committee.

The rupee has been stable and has even appreciated against the pound. The pound is now at a level last seen in 2013! Granted that this has more to do with the UK’s own local issues, but it still speaks to the strong fundamentals of the Indian currency. Exporters and IT companies with large exposure to the UK may be affected, but on the other hand its now quite cheap to visit the UK compared with the last few years.

The situation in Kashmir is worrying and any escalation of the conflict would have an effect on Indian markets. This is all in the backdrop of broader emerging market outperformance relative to India and a large India overweight of FIIs compared with the past.  If the narrative on India shifts from one of structural economic reforms to one about conflict between two nuclear armed neighbours, foreign investors would start pulling out of the market. They are already the biggest investors in both equity and fixed income and so an exodus could lead to large volatility in the market.