The shift in RBI stance on Inflation

The new reserve bank governor and the monetary policy committee (MPC) have led to a shift in RBI stance on inflation. Whilst previous rate cuts were made with an explicit inflation target, the current committee has decided that the mandate should be more flexible given slow global growth.

The MPC in its first policy meet has cut rates by 25 basis points. The rate cut was justified not on the basis of an undershoot of the inflation target, but more by tweaking the inflation targeting framework. Under Raghuram Rajan, the RBI was very clear in bringing inflation down and set a target of 4 per cent by March 2018. Under the Urjit Patel, the RBI and the MPC, the mandate seems to be to keep inflation within the range of 4 ± 2 per cent with no set date to achieve a specific level of inflation. Additionally, the previous governor was very clear that savers should get a positive real interest rate of between 1.5 to 2 per cent. This has been reduced under the current regime to 1.25 per cent, citing falling global real rates of interest. In effect the new interpretation of the inflation mandate and the dilution of the real interest rate has given the RBI room to cut rates with there being space for more easing going forward.

We take a look at some of the key take aways from the RBI’s latest Monetary Policy Report.

The RBI seemed to be more worried about growth of the global economy rather than the domestic one.

The report noted that global growth has slowed much more than expected with world trade contracting. It also cited risks to the downside from Brexit, banking stress in Europe, rebalancing of growth in China and rising protectionism globally. Commodity prices have risen in the last few months, helping to prop up commodity exporters like Brazil and Russia but upturn has been curbed by higher inventories. Overall, as can be seen in the chart above, it seems that the Advanced Economies are slowing down and growth is being led by the emerging markets. China and India together will contribute to over half of global GDP growth in 2016 and OECD leading indicators seem to suggest that growth momentum is picking up in Brazil, Russia, China and India.

Indian Economy is stable with risks from external shocks 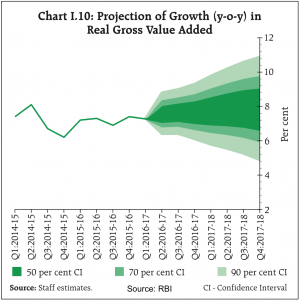 The RBI retained its projection of 7.6 per cent growth for the Indian Economy in 2016-2107. A good monsoon would lift agricultural growth and rural demand. Moreover, the pay commission award would give a boost to urban consumption.

The industrial sector is still facing contraction with IIP slowing over the last year. The report however said that strong public investment in roads, railways and inland waterways and the recent efforts by the government to unclog cash flows in large projects under arbitration would give a boost to the sector going forward. The external sector faced challenges due to sluggishness in world trade. It is likely that the RBI was of the view that the rate cut would likely support a revival in credit and boost productive sectors of the economy.

Food Inflation is coming down

Food has been one of the biggest drivers of inflation over the last few years. We had outlined in a previous post about how pulses are one of the main reasons that food inflation has been so high. 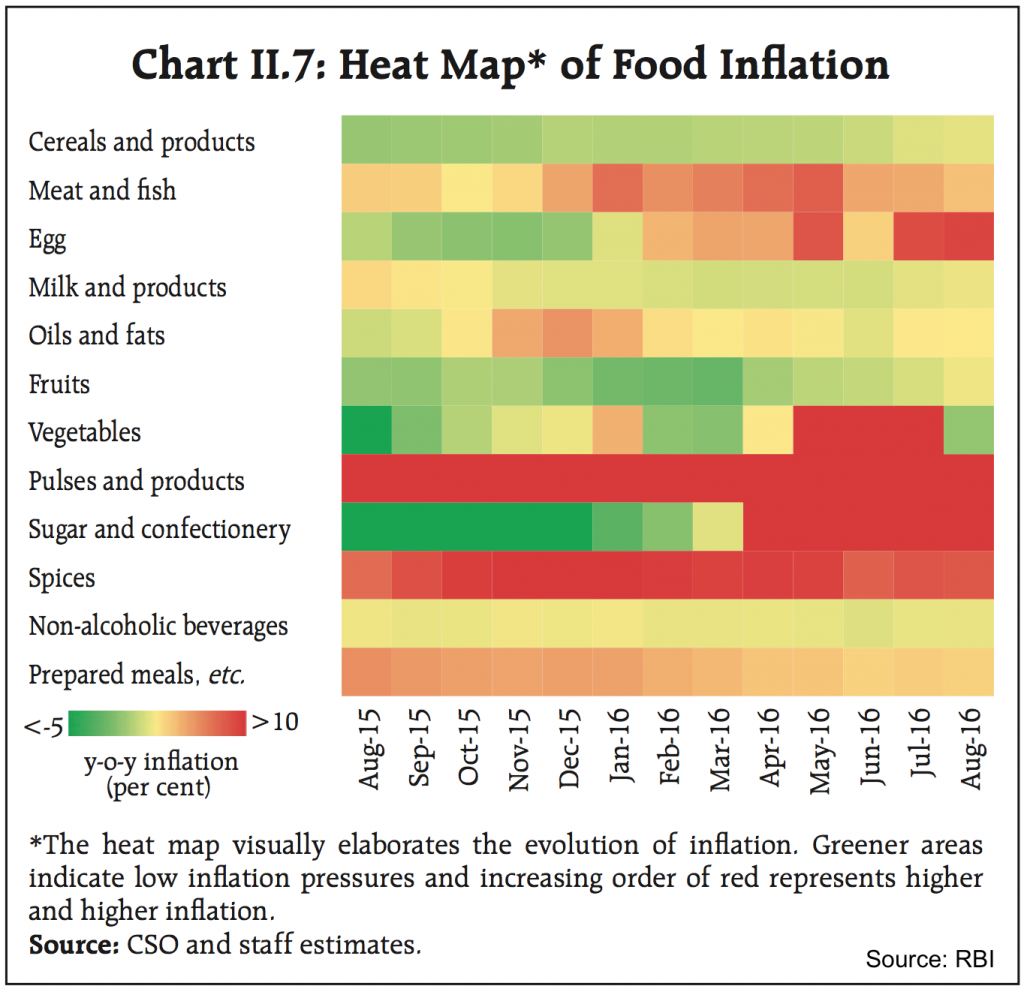 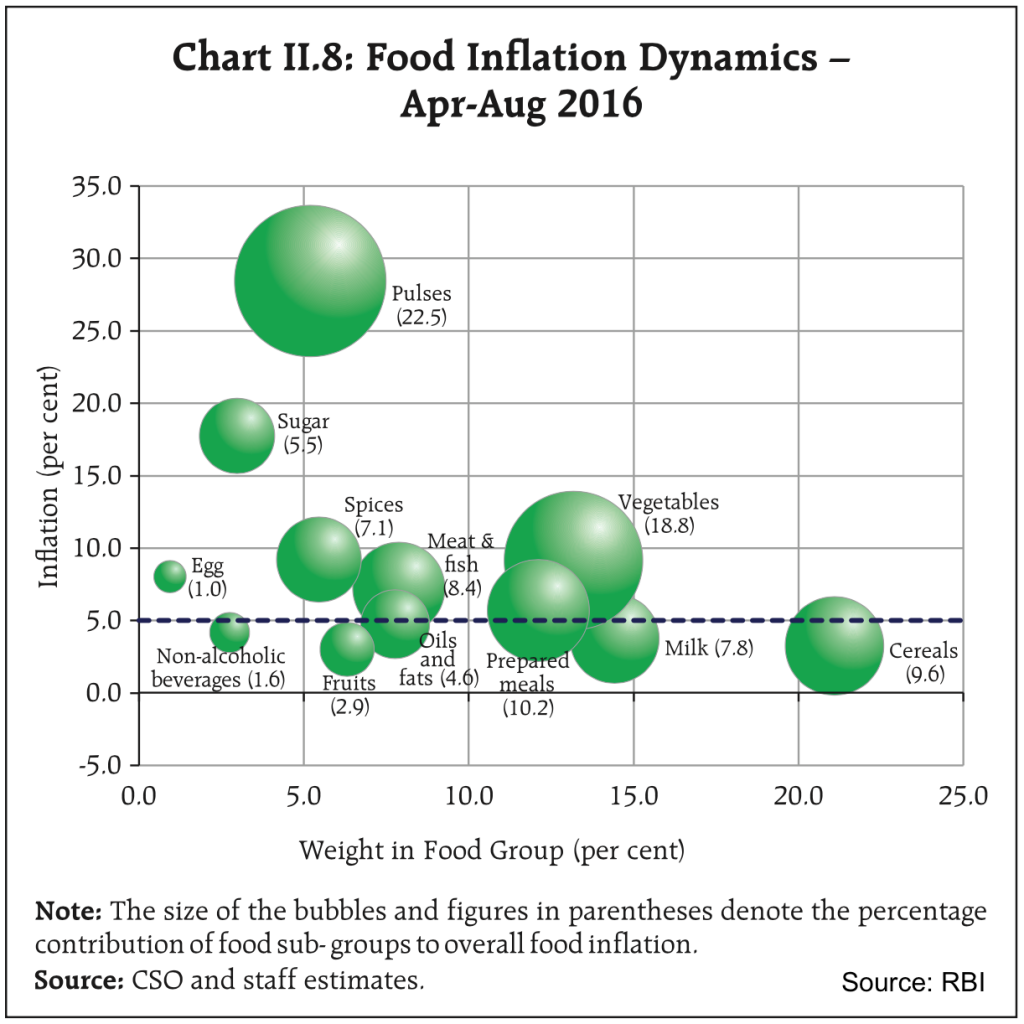 In fact you can see from the charts above, not only have pulses had the highest change in price over the years, it also has a large contribution to overall food inflation. Sugar and vegetables have also been points of stress in food inflation in recent months.

In order to augment the supply of pulses, the Government has undertaken a number of measures, including higher imports at zero import duty, raising the buffer stock of pulses as well as minimum support prices (MSP). The combined effects of these measures have led to a softening of  pulse prices. Some moderation in sugar prices is also expected this month as the cane- crushing season begins and fresh supply comes to market.

It is a very positive sign that the decline that we have seen in food inflation is not just because of base effects and that this is a structural change in the trajectory of prices. The food group contributed 59 per cent to average CPI, with pulses contributing 13 per cent to overall inflation during April-August period. This augurs well for the general inflation outlook going forward.

But general inflation will stay in a range

With falling food prices, you would expect that RBI would lower its inflation outlook. Instead the RBI expects inflation to rise to 5 per cent in March 2017 with risks tilted to the upside. The MPC has noted potential cost push pressures may emerge, including the 7th pay commission award’s effect on house rent allowances (HRA), and increase in minimum wages with possible spill over through minimum support prices.

With the latest rate cut, we can therefore deduce then that the RBI is comfortable as long as inflation stays under the mandated 6 per cent , and is now pushing to support growth.

And real interest rates are coming down

In his October letter, Niels Jensen of Absolute Return Partners talked about a paper by John Williams at the Federal Reserve Bank of San Francisco. The paper outlines how the natural interest rate of many countries has been declining over the years. 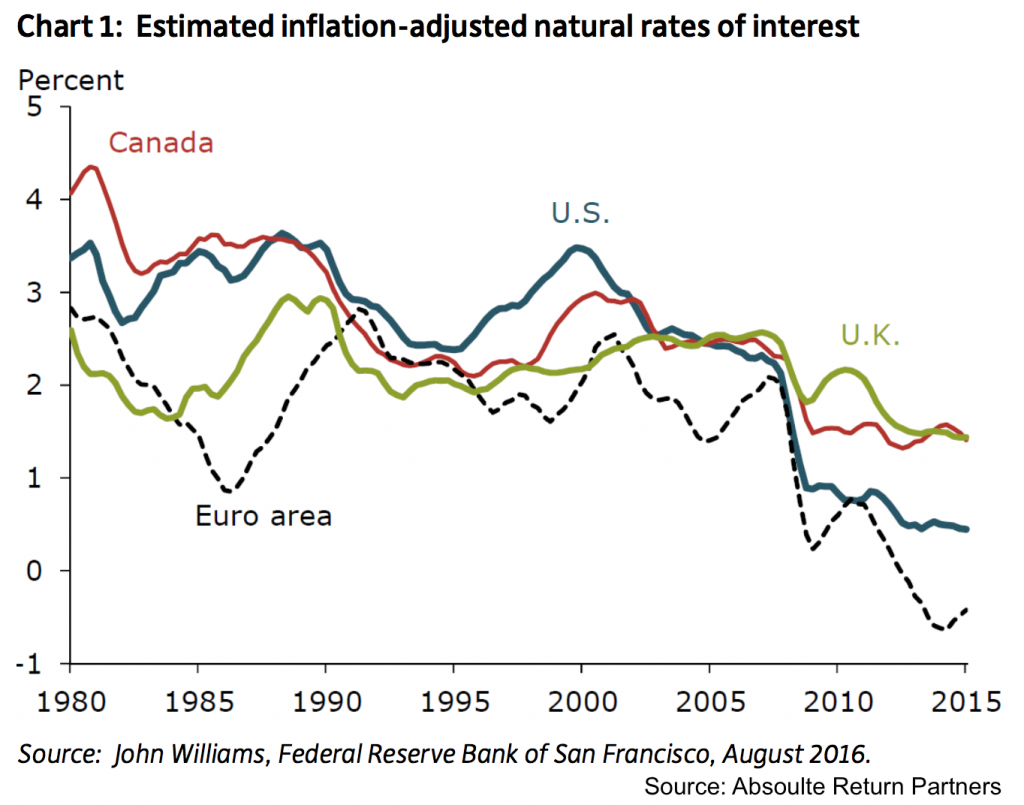 The MPC also makes note of this paper, both in its report and in the post-policy media interaction, stating that real interest rates have fallen to 1.25 per cent from 1.5 per cent earlier. Given the year-end RBI inflation projection of 5%, a 6.25% policy rate is justified.

If the RBI believes that retail inflation will come down to 4.5% by March 2018, the policy rate should then come down by another 50 basis points to 5.75 per cent. With global rates falling closer to zero more recently, this 1.25 per cent real interest rate could also fall further going forward.

It is clear that there has been a shift in the RBI thinking with the new MPC and new governor. By tweaking the policy parameters, the RBI has now moved to a system of flexible inflation targeting. As long as inflation stays within the band of 2 to 6 per cent over the medium term, it seems that the RBI will be more comfortable in supporting growth. By observing the shrinkage of the real interest rate, the reserve bank has also given itself more room to cut rates going forward.

2 thoughts on “The shift in RBI stance on Inflation”