Demonetisation and the burden on banking

A lot of stories in the media cover how demonetisation is positive for banks in the long run because of increased financial penetration. But there are also a number of issues that banks will also have to deal with in the short term. We summarise an article by FT Alphaville which analyses Credit Suisse’s latest report on some of these burdens. 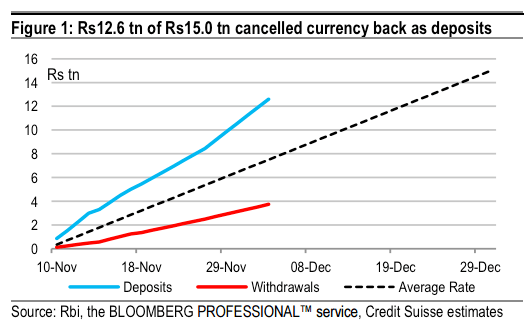 If we take an updated look at the amount of money that has been deposited back into the banks since 8th November, we see that almost 12.6 trillion out of the estimated 15 trillion of the cancelled currency has come back into the banking system. Given that there is still time to the deadline of 30th December, it is highly likely that most of the old notes will be deposited back.

From a banks perspective, it would be an extremely difficult task to ensure that all processes are properly adhered to in the rush and panic of this whole exercise. From Credit Suisse’s Neelkanth Mishra:

Inventory management of old notes: Even the best of supply chains get stressed when volumes surge 15-20x. With banks getting currency worth Rs12.6 tn in four weeks (Figure 1), handling of these old notes is likely to have tested banks’ control processes. It appears most of the deposited notes are still with banks—if a bank is unable to show old notes against the liability (i.e., deposit), its equity capital may be affected negatively. It may take months of audits to unearth the lost notes and penalise errant staff if any.

There are already a number of reports out there that suggest that employees of some banks have been engaging in corrupt practices. From Mishra again:

Heightened government scrutiny: As the government starts analysing where the higher-than-expected deposits came from and how they got into the system, banks and their staff could face intense scrutiny, and possible penalties if improprieties are found.

In fact, with the narrative changing away from black money and toward bold reform, we are likely to see increased scrutiny across the board. The government has already amended the Income Tax Laws giving the authorities much greater powers to levy fines and penalties. And because the government will be compelled to show results, it is likely that we will see increased tax terrorism on citizens and businesses.

We would also like to add that banks are in the business of lending and not of depositing. With new notes still in short supply, the amount of currency going back in circulation is low (as can be seen in the figure above). This will definitely hit the profits of banks because until the currency circulation goes back to more normal levels, economic activity will stall. Demonetisation also increases stress on SMEs and could make the bank NPA problem much worse than it already is. There is also the issue of overworked employees dealing with a frustrated public, which could result in union problems. All-in-all, a number of issues that these banks will have to deal with in the short term. Hopefully the benefits will offset these in the long run. Then again, in the long run, we are all dead.