November was a volatile month across financial markets,. We look at returns of various asset classes such as equity, debt, gold, crude oil and the Indian rupee in our latest monthly market summary. 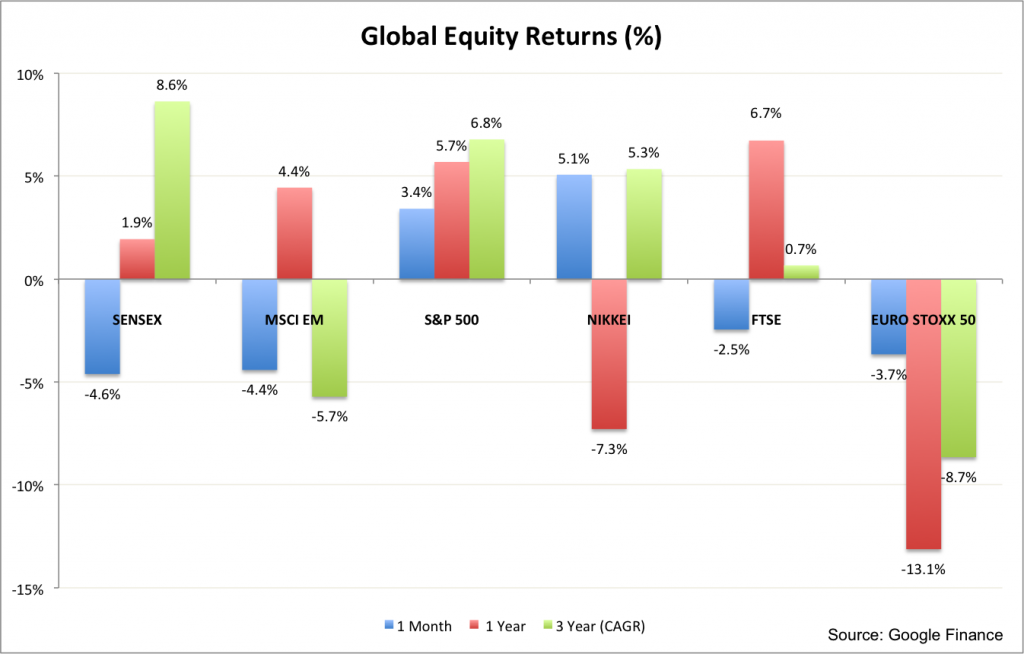 Barring the S&P500 and the Nikkei, most global equities markets showed sharply negative returns. This is probably in reaction to the results of the US election. The US equity markets rallied strongly on the expectation that the Donald Trump will introduce policies that will boost America’s domestic economy and the expectation that a boost in infrastructure and rising treasury yields will lead to a stronger dollar.

Other major global indices saw the opposite effect. Brexit and the US election has shown the trend of a pushback against globalisation and an increasingly protectionist world. This will likely have an effect on global trade and on global growth. With major trade deals now in question, companies will increasingly be encouraged to invest in their domestic economy and we will likely see capital flows reflect the same.

One interesting point of note is that even though the Sensex has fallen sharply in the last month, the correction is in line with the broader emerging market basket and with other global indices. Demonetisation was a huge shock to our economy, but global events are influencing our markets even more. The last few years have seen a huge inflow of money into India and foreign investors are heavily overweight our economy within the broader emerging market basket. This can be a risk to our market given that the trend is now for capital flows to move out of emerging markets back to the US and also given that the risk premium has now increased on India given the uncertainty over demonetisation. 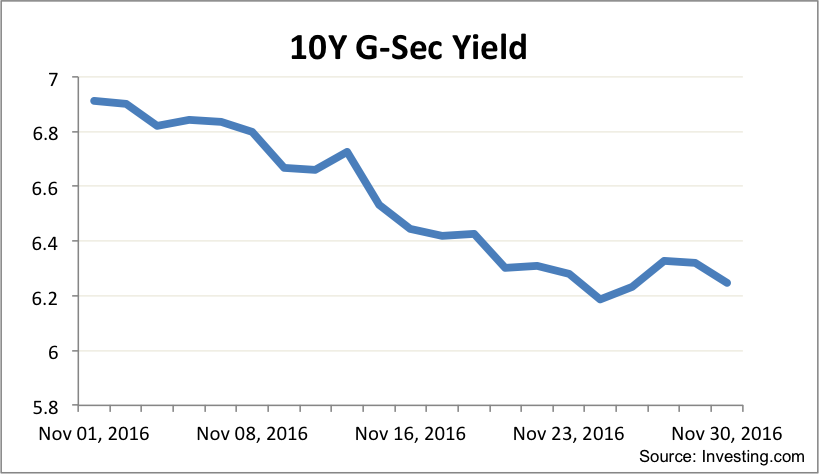 Demonetisation has led to a huge rally in bonds, with government yields falling by over 50 basis points! The banking system has been flush with liquidity and the RBI has tried to absorb the excess liquidity in the system by hiking CRR to prevent the overnight rates falling much below the repo rate. The demonetisation exercise is likely to have a negative impact on GDP growth and will also be deflationary as money velocity stalls. Consumers cannot withdraw as much cash as they have deposited and this will likely affect consumption which is one of the major drivers of the domestic economy.

What is even more remarkable is that this rally has happened while there has been a global selloff in bond yields. The US presidential elections have triggered expectations that the burden of growth will now shift from monetary policy to fiscal policy. It is very difficult to tell what bond yields will be going forward given the level of uncertainty and unknowns with respect to both the global scenario as well as the domestic economy. The market will probably look to the RBI to give cues on its outlook for inflation and growth in next weeks monetary policy. 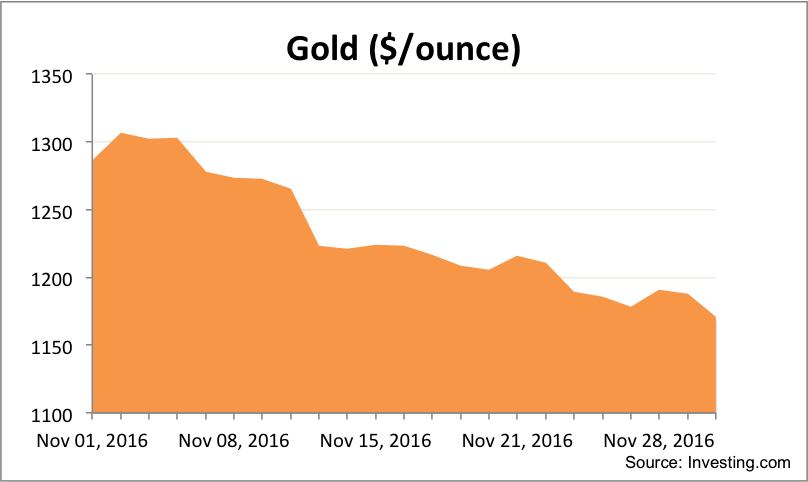 Gold has fallen sharply in November and closed the month at just under $1200 per ounce. For most of the year it has traded in the 1200-1400 dollar range. Gold is likely reflecting trends of a stronger US Dollar. A continued move below this below 1200 over the next few months would be bearish for the commodity. India imports a large quantity of gold and so sustained low prices for gold is very good for our current account deficit. 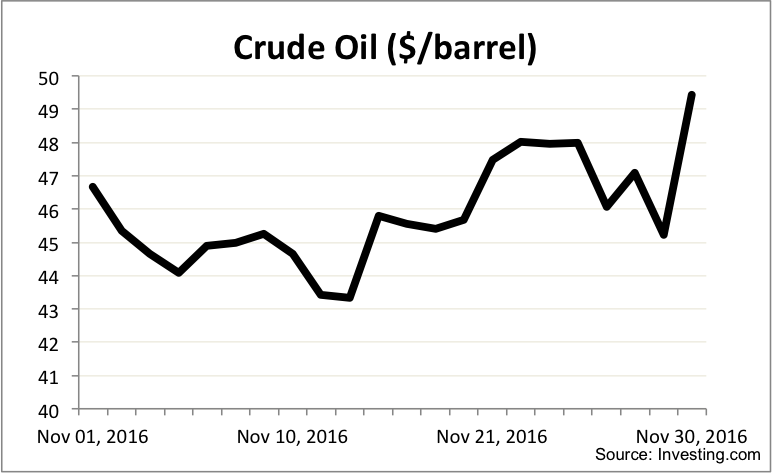 Oil stayed within the range of 40-50 dollars a barrel in November. While it is difficult to predict the price trend of these commodities, it is important to keep an eye on them because they form a large portion of India’s import bill. Already, indications of a reduction in OPEC supply have led to a rally of oil prices beyond $50 per barrel in the first few days of December. Any strong moves in oil could affect our economy’s fiscal stability because it forms a large portion of our import bill. 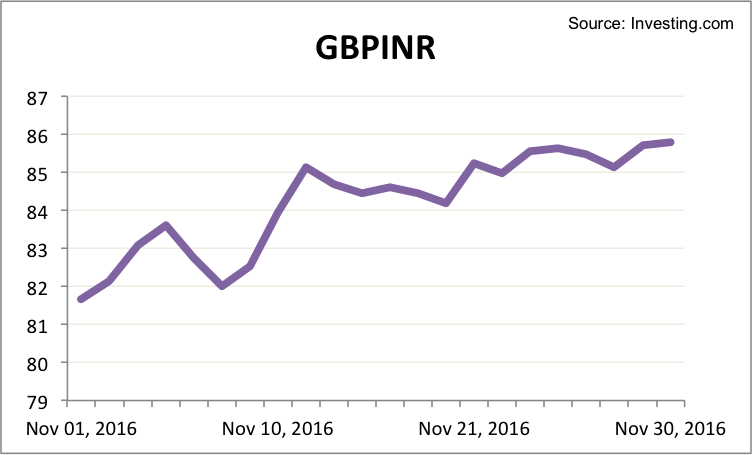 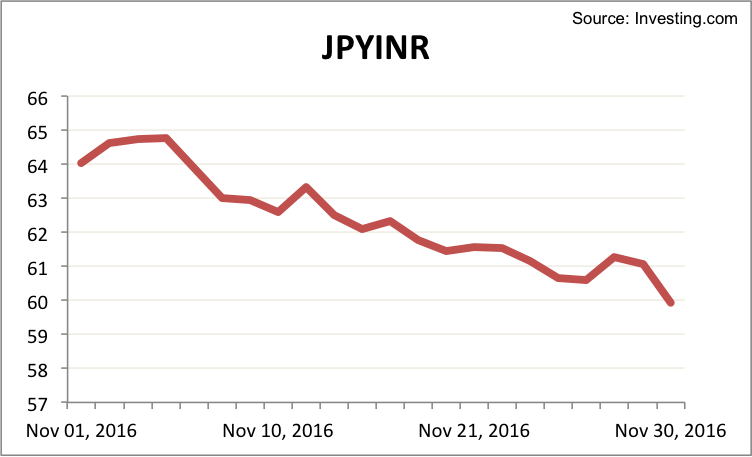 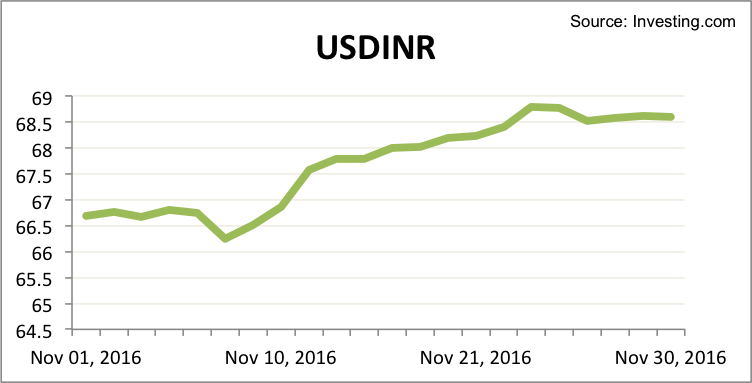 The appreciation of the US dollar continues to accelerate, with the Rupee now near 69 per dollar. This is reflecting the strength of the US Dollar and it would be unsurprising if the currency crosses the 70 mark. The pound has also rebounded to the levels of 85 in the last month. It is yet to be determined if this is a short recovery or a change in trend, and the outcome will likely be decided on the terms of the Brexit deal. The yen has shown a marginal depreciation against the rupee, mirroring global currency pairs and the euro has been broadly stable.