Back in late 2014, I wrote an article for Firstpost in which I outlined how I thought the Rupee would move to 65 against the dollar and could go to 70 as well. With the FED increasing rates for the second time and with rupee almost touching 69 in November, I thought it would be a good time to relook at the outlook for the Dollar-Rupee.

In 2014, the reasons for which we thought the Rupee would depreciate further were:

In 2015, we saw oil prices collapse and this changed the equation for the rupee. 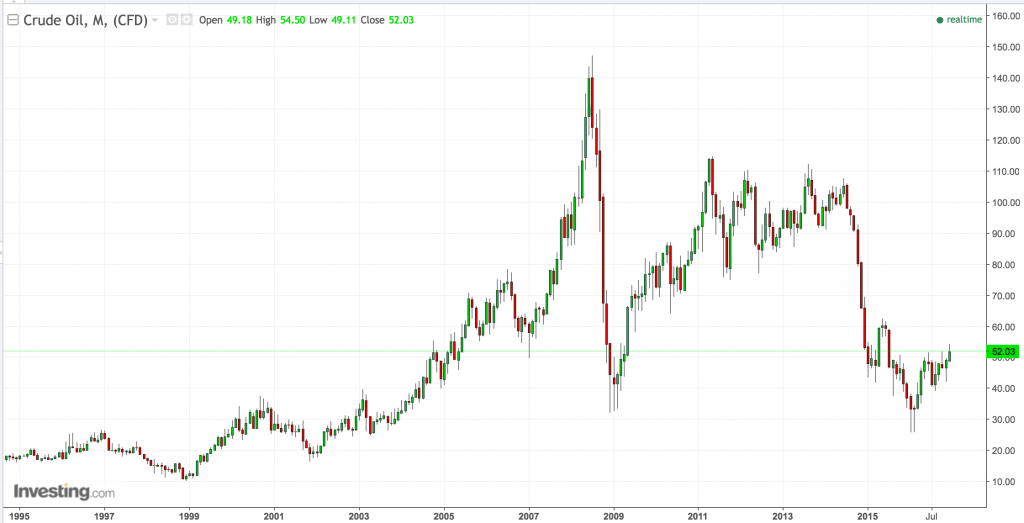 Oil forms a large part of our import bill and the dramatic fall from levels above 100 dollars a barrel to under 30 in the span of 1.5 years was hugely beneficial to the Indian economy. The fall in oil was a major contributor to bringing our current account deficit into control and correcting the fiscal imbalance in our economy. The government was also very proactive and decontrolled fuel prices. It actually went a step further and increased taxation on retail prices of fuel so that it could garner additional resources.

With more structural reforms being passed and the advent of a good monsoon, the domestic economy started to show signs of pickup and inflation was also structurally moving lower. Foreign investors also poured in money to invest in our economy because it was one of the best opportunities globally.

These positive trends can be seen playing out in the currency over the last few years: 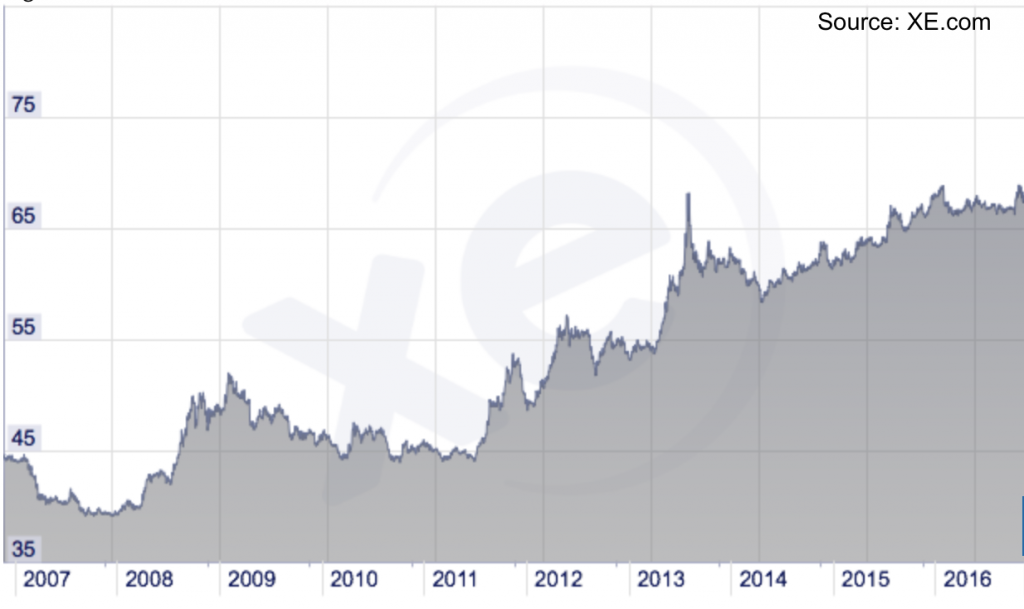 We see that the Dollar-Rupee had broadly stabilised a little above 65 for a large part of 2015 and most of 2016.

What factors could drive the rupee going forward?

If we re-examine some of the factors that we originally looked at:

Oil: As can be seen in the chart above, crude oil prices have been rising since the beginning of the year. The OPEC has also announced supply curbs in an attempt to help shore up the price. It seems unlikely that oil will go back to the levels of 100 dollars a barrel anytime soon because of increasing supply from the shale gas revolution and from Iran. However any move above 60 dollars a barrel will start to create trouble for our fiscal balance sheet.

Gold: Gold imports in October-November of this year were  significantly higher than expected according to an ICRA report. While some of this is seasonal, if the trend persists, it would increase our import bill.

REER: The currency continues to be overvalued on an REER basis. In October the 36-currency REER was 117.12 and in a six-currency basket, the REER was 127.65. A REER value of 100 is normal, anything above it indicates overvaluation of rupee.

Strong Dollar: The US Dollar hit a 14-year high after the FED rate hike. This is affecting all emerging market currencies which are now showing a weakening bias.

Declining Bond spreads: India has been seeing falling inflation and lower interest rates due to structural changes in our economy. Demonetisation actually accelerated the fall in yields because it is in effect a deflationary shock to the economy as money supply gets sucked out. On the other hand, we see that the US economy is now in recovery mode with inflation rising and the economy getting close to full employment.  The FED has already raised rates and looks to accelerate the pace going forward. This dynamic has led to a narrowing differential between US and Indian bond yields: 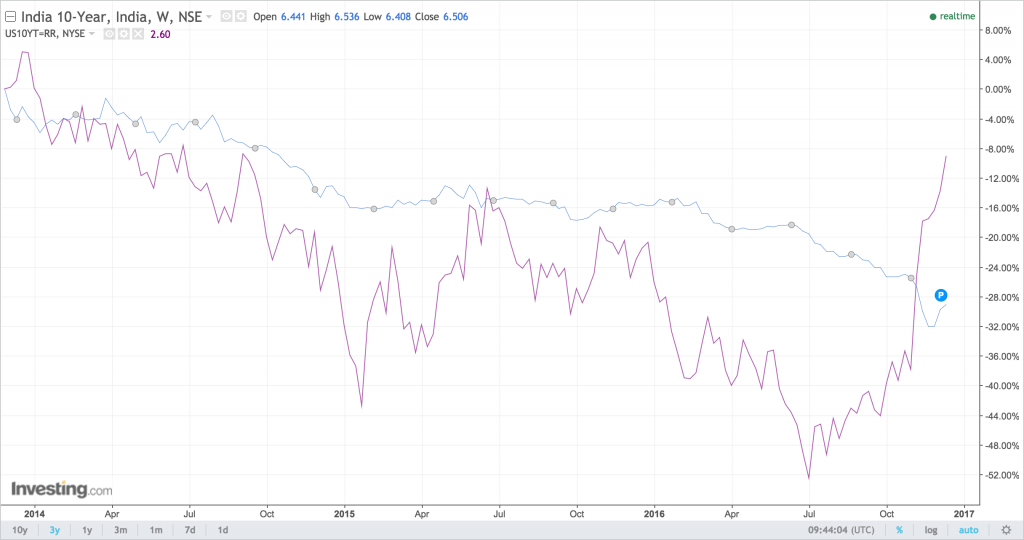 A narrower differential in yields makes it less attractive for foreign investors to invest in Indian government bonds. We have already seen over $1.8 billion in outflows from the Indian debt markets in November.

Put together all these factors point to a further depreciation of the Rupee. While the pace of depreciation is unknown, it would not be surprising for the Dollar-Rupee to cross 70 next year.