How will automation impact employment and growth?

McKinsey Global Institute has come out with a great report on automation and its impact on employment and on productivity in global growth. The report has a lot of great charts and insights, some of which we have summarised below. We encourage you to go through the report in its entirety as it has some great information on the likely impact of this technology over the next few decades.

Ruchir Sharma, of Morgan Stanley, has talked extensively about one of the great challenges facing the world today: the challenge of demographics. Today a large part of the global economy is facing the problem of a declining workforce. This is attributed mainly to an ageing population and declining birth rates globally. Ruchir believes that GDP growth can be broken down into two parts: growth in working age population and growth in the productivity of that population. This means that if the working age population is shrinking, it becomes that much more challenging for economies to grow at the high rates that they have been used to over the last 50 years. McKinsey has a great chart that encapsulates this effect. 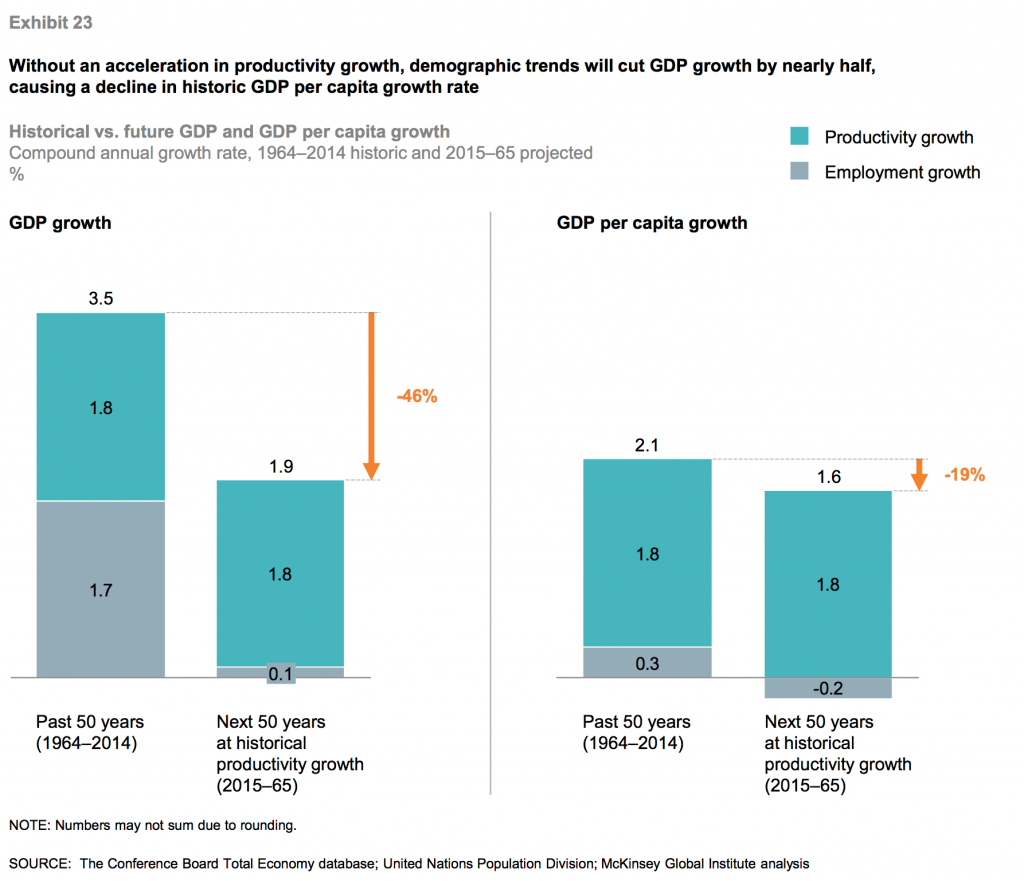 Without an increase in productivity, global growth may halve over the next 50 years and as a result GDP per capita will also decline in the same time frame. With this in context, the report argues that automation can be a significant opportunity. Automation could raise productivity from 0.8 to 1.4 per cent annually. Even this may not be enough to reach GDP per capita targets, but it could be an important contributor nonetheless. 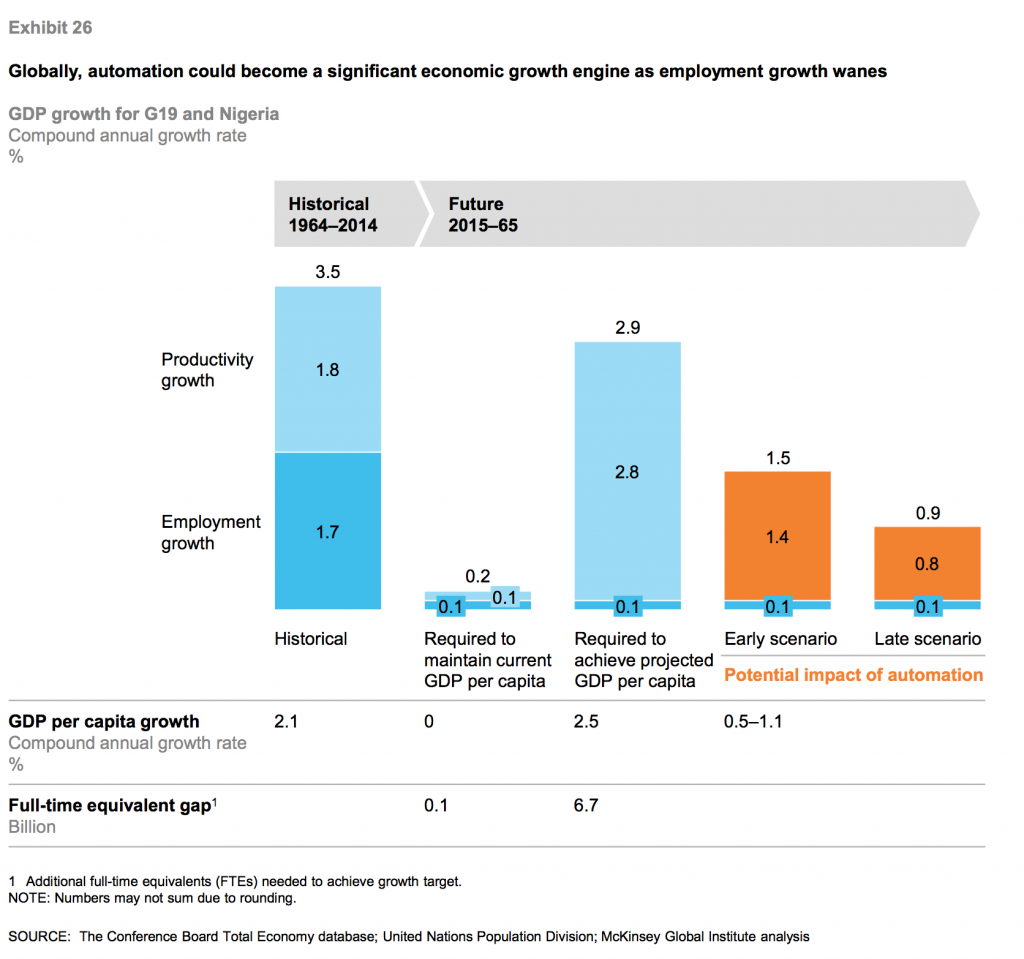 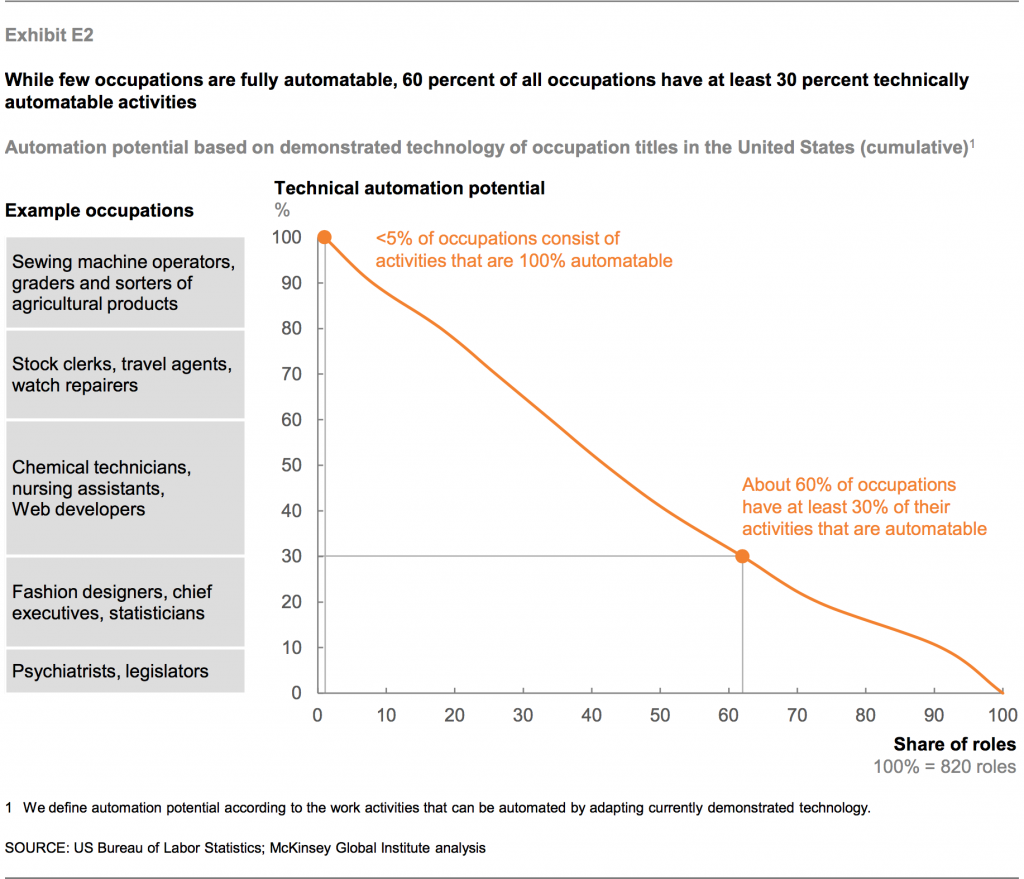 Activities that are likely to be automated earlier include predictable physical activities. However skill-based activities are also susceptible with technology  being able to automate routine tasks. 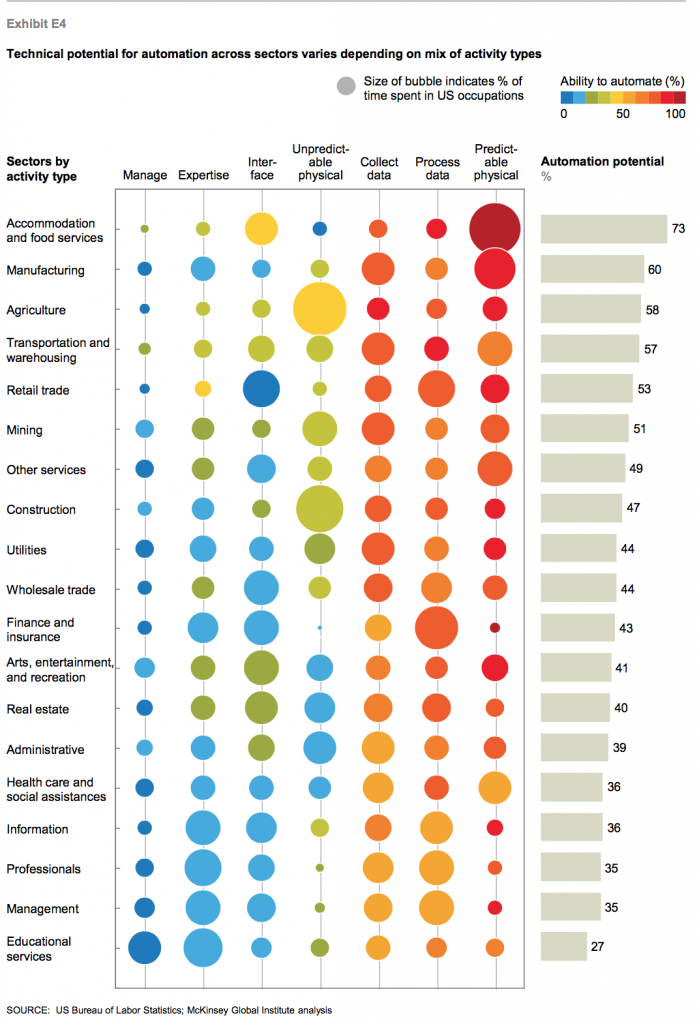 Automation will fundamentally alter the workplace. Workers will be required to be familiar with and use technology extensively and this will effect a big change in how companies work. While automation will change the nature of work, the public debate on the subject focuses mainly on how it will lead to large scale unemployment. Such concerns have been seen in the past and the report suggests that we can’t be sure if things will be different this time. The report suggests that automation will enable a shift in employment similar to the shift in developed countries’ workforces away from agriculture in the early part of the 20th century. That shift did not result in mass unemployment and, in fact, was accompanied by the creation of new types of work not foreseen at the time.

Finally, the report also outlines the effect of automation of different countries around the world. India and China both have an automation potential around 50 per cent. The dynamics of their economies are also similar. They have similar top sectors, including agriculture, manufacturing, retail, construction, and transportation and warehousing, and the automation potential within each sector is very similar. The main difference is that China is reliant more on retail and manufacturing while India is more reliant on agriculture in terms of share of hours worked. 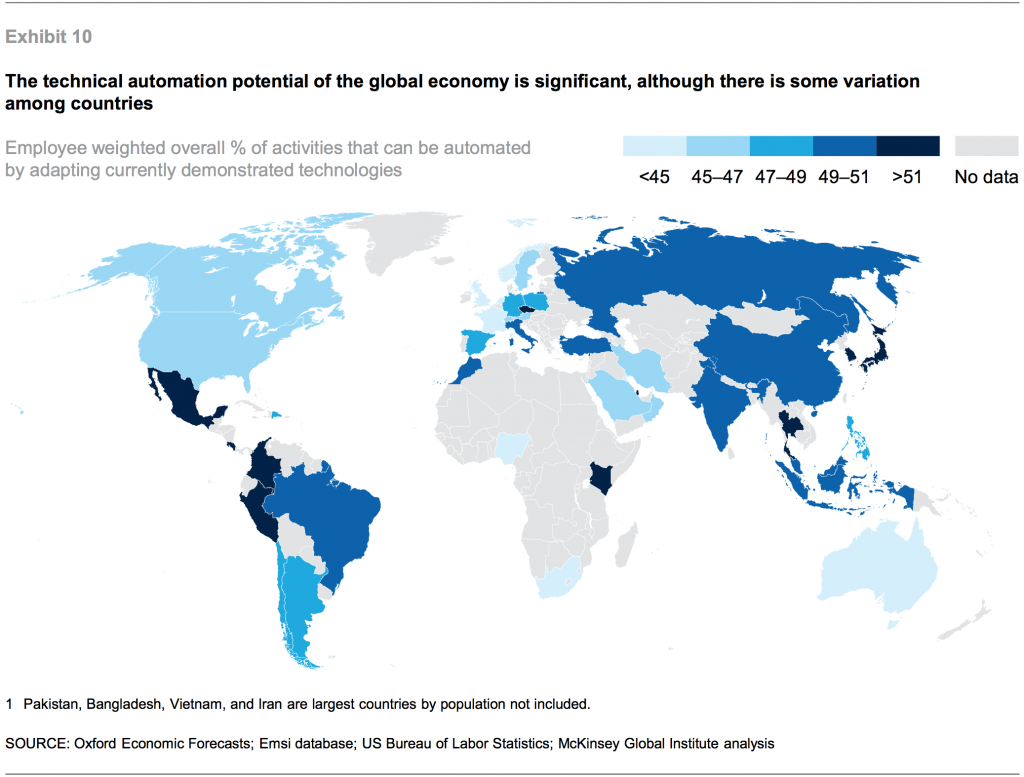 Advanced economies could benefit significantly from automation to compensate for shrinking workforces. Some emerging markets with ageing workforces, like South Korea, could benefit from the productivity boost of automation, but would need additional resources to maintain their growth trajectory. Finally emerging markets with younger populations will get a boost from automation but it may not be enough to support longer term growth. These countries all have aspirations for high long- term growth, in order to lift living standards for the rising population. Unfortunately, they can no longer rely on the “low-cost” development model to drive growth. In fact many of them, like India, will likely be affected by “premature de-industrialisation”.