Globally we have seen a huge shift in the way people invest in the financial markets. Investors have increasingly allocated money towards passive investing at the expense of actively managed funds. India has so far managed to buck this trend, primarily because active fund managers here still outperform the benchmarks. But this is slowly changing.

One of the main reasons for the big shift of financial flows from active to passive management is because of the inability of active managers globally to outperform their benchmarks consistently after fees. Developed markets have become increasingly more efficient with market participants having better capabilities. Most funds have the best talent, technology and professional expertise to exploit pricing inefficiencies. This has lead to a situation where it is harder for funds to outperform each other and the market.

Active managers also charge hefty fees, sometimes as high as 2-2.5 per cent. Passive index funds on the other hand are available for a fraction of the cost. The high fees charged by active funds therefore have become a drag on the performance of funds who now find it difficult to beat the benchmark. This is why we see huge flows going out of traditional active managers and moving to passive funds.

India has managed to buck this trend for many years. The equity markets have been quite inefficient and mainly dominated by foreign funds who have focused only on the large-caps in the space. The indexes are also full of highly inefficient state owned companies that generate low returns on capital. It has therefore been relatively easy for active managers to handily outperform their benchmarks over time. However things are beginning to change. We refer to a strategy report by Ambit Capital that analyses “Alpha Squeeze” in Indian large caps.

The report looks at the historical returns of the index against 19 large cap actively managed mutual funds.

As can be seen from the chart above, the average and median returns of actively managed mutual funds have handily beaten the index over rolling 1, 3, 5 and 10 year periods. However the report then goes a step further to break down these returns to periods before 2010 and post 2010. This was done to demarcate the period when when equities did really well from 2003-2008 and for the 2009 rally. What they find is that actively managed funds generated significant alpha before 2010, but after 2010, on a rolling 10-years basis, mutual funds have been unable to outperform the benchmark BSE-100. 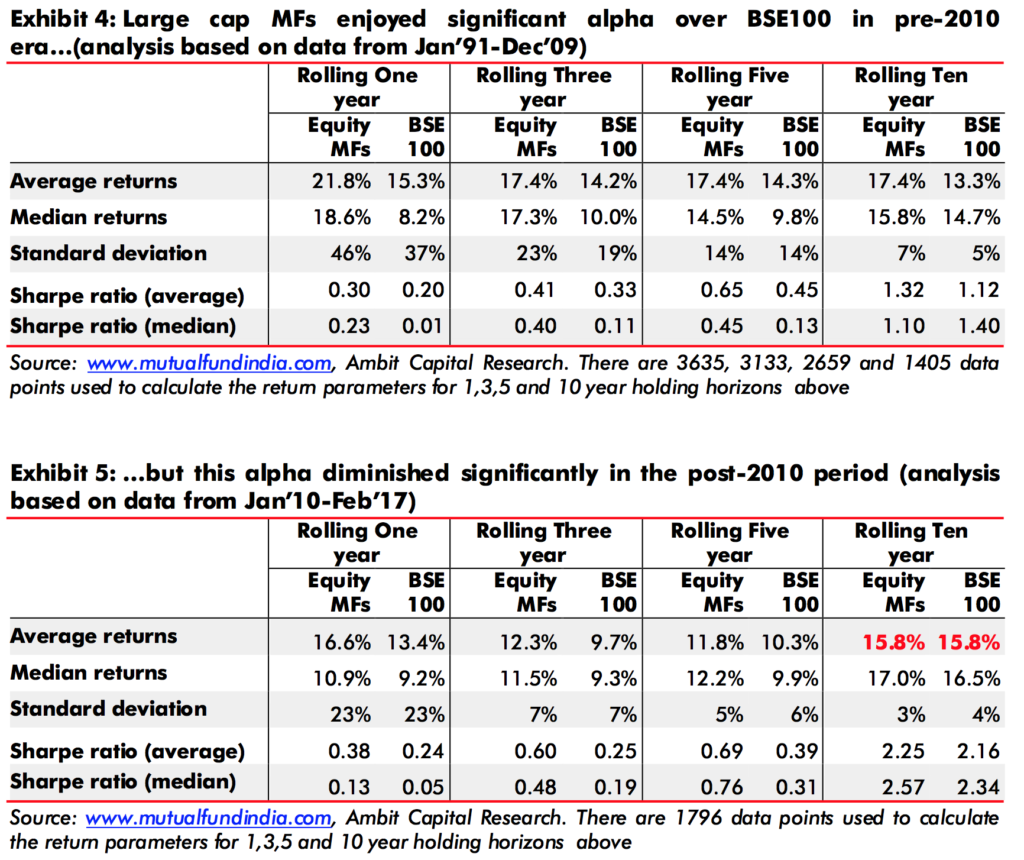 While this is a great insight, it must be said that this is an incomplete assessment and it would be unfair to take this data on face value. Firstly, this is based on fewer data points when compared to the first table (Exhibit 2). And second, the data ends in February, post which we have seen a big rally in Indian equities markets. It may be too early to tell and we may not have a definitive trend for a few more years.

But it also must be noted that we have seen strong and consistent domestic flows into mutual funds over the last few years. With more assets under management in their schemes, and given increasing competition, fund-houses are going to have more difficulty generating alpha. At the same time foreign pensions funds and institutional players have started investing in India in a big way. It is but natural that the market will become more efficient, particularly in the large-caps. Simultaneously, the government is also encouraging pension money to go through the ETF route. As the volumes increase in these ETFs, the fees charged will start to come down dramatically. It is therefore quite likely that the Indian markets will reach a point where passive management starts to outperform. The only question is when.

So how may this unfold in the Indian context? For this, the Ambit report has a nice table that shows how the US markets evolved in terms of active and passive management. It may be that the Indian markets may mimic the same pattern.

The report also talks about investment implications for fund managers. While large-caps may increasingly get more efficient, there would still be plenty of opportunity in the mid and small-cap space. The report therefore sees that mutual fund managers may increasingly start allocating more of the portfolio to smaller companies and also and increasing focus on structural plays which generate alpha over the long term.

2 thoughts on “Active vs. Passive Investing”