The global tightening of financial markets

2018 has seen tightening in financial markets across the globe. This is having divergent effects on growth for different economies. This trend is in sharp contrast to to the synchronised recovery and easy liquidity conditions we were seeing in 2016 and 2017.

The US economy continues to have strong momentum. The FED has gradually removed accommodation and has raised rates every year since 2015. As a result, the term spread has started to narrow and yield curve has started to flatten. The BIS has captured this in its latest quarterly review in the following chart:

The “flight to safety” effect has kept long term yields low in the US. It has also probably contributed, along with escalating trade tensions, to the rally of the US dollar. This has put further pressure on emerging market economies. India is not alone in that a number of such economies have been experiencing portfolio outflows with policy or political uncertainty compounding market stress and currency depreciation. 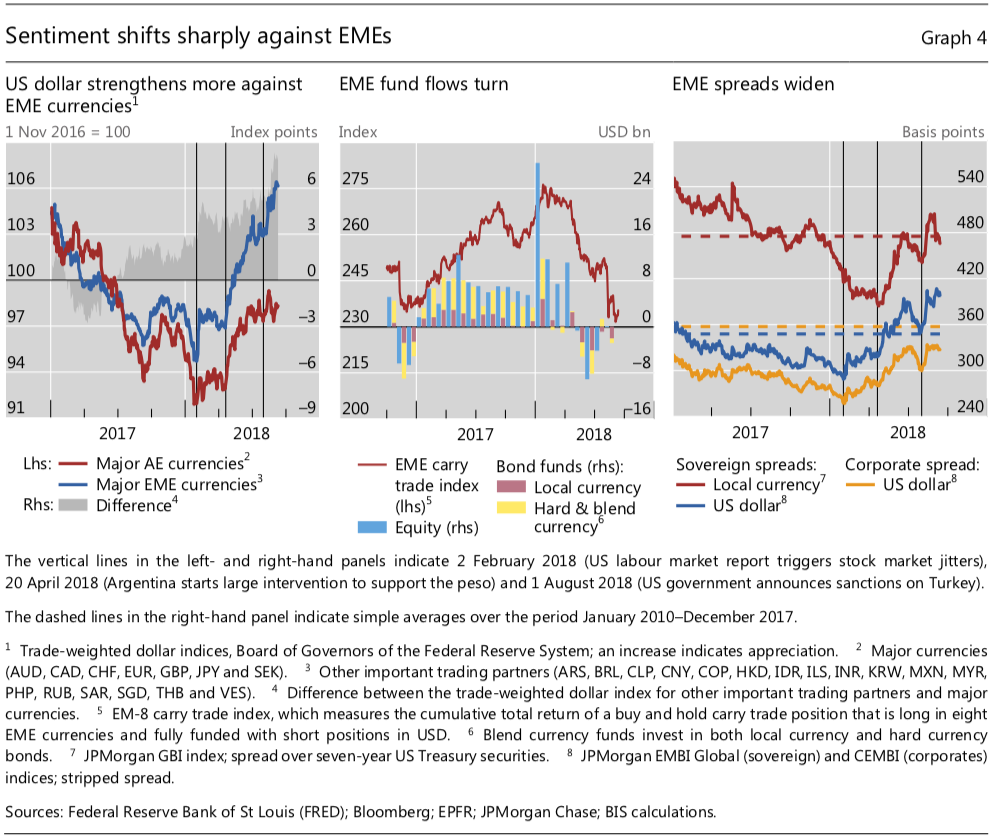 The long and unprecedented run of 16 consecutive months of net inflows to EME investment funds was cut short in May (Graph 4, centre panel). The slowdown had actually started in February for hard currency bond funds, and then extended to equity and local currency bonds as the US dollar appreciation accelerated in late April. This in turn reduced the returns on those assets for dollar-based investors. Unusually large EME carry trade returns fell precipitously as from April, dropping in August below the low levels of November 2016 (Graph 4, centre panel).

A number of these emerging economies benefitted from loose monetary policy of the developed economies over the last decade. Now that the liquidity is being withdrawn, the economies that have not addressed structural issues are feeling the most pain.

The expectation is that global liquidity and credit conditions will continue to tighten, especially in the USA. A flat yield curve generally portends a recession. With other markets already showing signs of losing momentum, what does it mean if even US growth starts cooling off?

How does the balance of payments affect demand?