The RBI Annual Report generally has a lot of interesting charts and data that give good insights into the state of the economy. In this second post, we cover five charts that we found quite informative from the latest report. 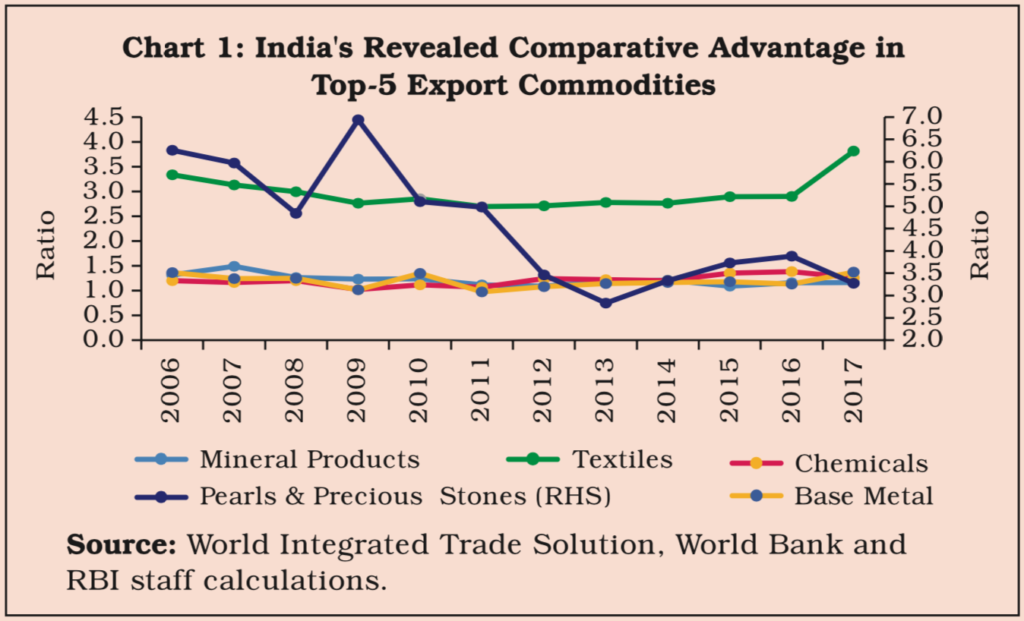 A measure of a country’s export performance is to track its share of world sports over time. According to the RBI report, India’s share of world exports have grown by about 2.5 times between the year 2000 and 2017. When we look at relative increases in particular goods, we see that India’s relative comparative advantage (RCA) “eroded considerably” in the pearls and precious stones segment but has seen some improvement in textiles. The chart above shows the  RCA for the top 5 exports from India and an RCA value greater than 1 indicates a comparative advantage.

We can see from the chart above that we have a large and growing trade deficit with China. Possibly a large contributing factor is the import of smartphone and other electronic goods. On the other hand we have a trade surplus with the US and this is probably why we hear rhetoric from Donald Trump about India having unfair terms of trade with America.

3. Imports of electronics and pearls and precious stones has risen sharply

Non-oil non-gold imports accounted for 65.1 per cent of total import growth on a weighted contribution basis as a part of domestic demand spilled into imports (Box II.6.3). Electronic goods, pearls and precious stones, coal, chemicals, machinery and iron and steel together contributed more than half of the growth in this segment (Chart II.6.4)

With import growth largely outpacing that of exports throughout the year, the merchandise trade deficit expanded to a five-year high. Since 2011- 12, the trade deficit has averaged 7.3 per cent of GDP, making it pivotal in the overall balance of payments.

4. The steady rise of Bank Frauds in India

The number of cases on frauds reported by banks were generally hovering at around 4500 in the last 10 years before their increase to 5835 in 2017-18 (Chart VI.1a). Similarly, the amount involved in frauds was increasing gradually, followed by a significant increase in 2017-18 to Rs. 410 billion (Chart VI.1b). The quantum jump in the amount involved in frauds during 2017-18 was on account of a large value fraud committed in gems and jewellery sector, mainly affecting one public sector bank (PSB).

5. And the Public sector banks are mostly to blame

During 2017-18, PSBs accounted for 92.9 per cent of the amount involved in frauds of more than Rs. 0.1 million, as reported to the Reserve Bank while the private sector banks accounted for 6 per cent. As regards cumulative amount involved in frauds till March 31, 2018, PSBs accounted for around 85 per cent, while the private sector banks accounted for a little over 10 per cent. At the system level, frauds in loans, by amount, accounted for more than 75 per cent of frauds involving amounts of Rs. 0.1 million and above while frauds in deposit accounts were at just over 3 per cent (Chart VI.2). Within the loan category of frauds, PSBs accounted for a major share (87 per cent) followed by the private sector banks (11 per cent). The share of PSBs in frauds relating to ‘off-balance sheet items’ such as Letter of Credit (LCs), LoU, and Letter of Acceptance was even higher at 96 per cent. New private sector banks accounted for more than 20 per cent of the frauds related to ‘cash/cheques/clearing’ and ‘foreign exchange transactions’. New private sector and foreign banks accounted for 36 per cent each of all cyber frauds reported in debit, credit and ATM cards, among others. Out of the seven classifications of frauds in alignment with the Indian Penal Code, ‘cheating and forgery’ was the major component followed by ‘misappropriation and criminal breach of trust’. In ‘cheating and forgery’ cases, the most common modus operandi was multiple mortgage and forged documents. Mumbai (Greater Mumbai), Kolkata and Delhi were the top three cities in reporting of bank frauds through ‘cheating and forgery’. In respect of staff involvement in frauds, banks reported that it was prominent in the categories ‘cash’ and ‘deposits’, which had a much smaller share in the overall number of fraud incidents and the amount involved. 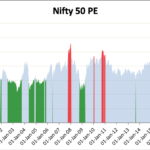 How does the balance of payments affect demand?