The RBI recently released its Report on Trend and Progress of Banking in India 2017-18. In the report they have a whole section dedicated to developments in cooperative banking. Cooperative banks play a significant role in boosting financial inclusion because they provide credit to the unbanked segments of society. I found some of the data and analysis quite enlightening especially because there is not much coverage about these institutions in the financial media. Here are some of the key charts and takeaways.

The Reserve Bank pursued an active licensing policy for UCBs during 1993-2004, which led to a sharp increase in their numbers. Subsequently, as signs of incipient financial fragilities in the sector became evident, the Reserve Bank enunciated appropriate regulatory and supervisory policies in its Vision Document (2005) involving inter alia merger/amalgamation of weak but viable UCBs and closure of unviable ones. As a result, the number of UCBs declined (Chart V.2). Maharashtra, which has the highest number of UCBs, accounted for the largest number of mergers, followed by Gujarat (Chart V.3).

But even though the number of UCBs have come down, the ones that were left have seen a large increase in their asset base which speaks to their stronger financial position.

Traditionally UCBs have had higher level of NPAs than Scheduled Commercial Banks (SCBs). Since 2015-16, however, the position has reversed, with NPAs of SCBs increasing sharply after the asset quality review (Chart V.12). 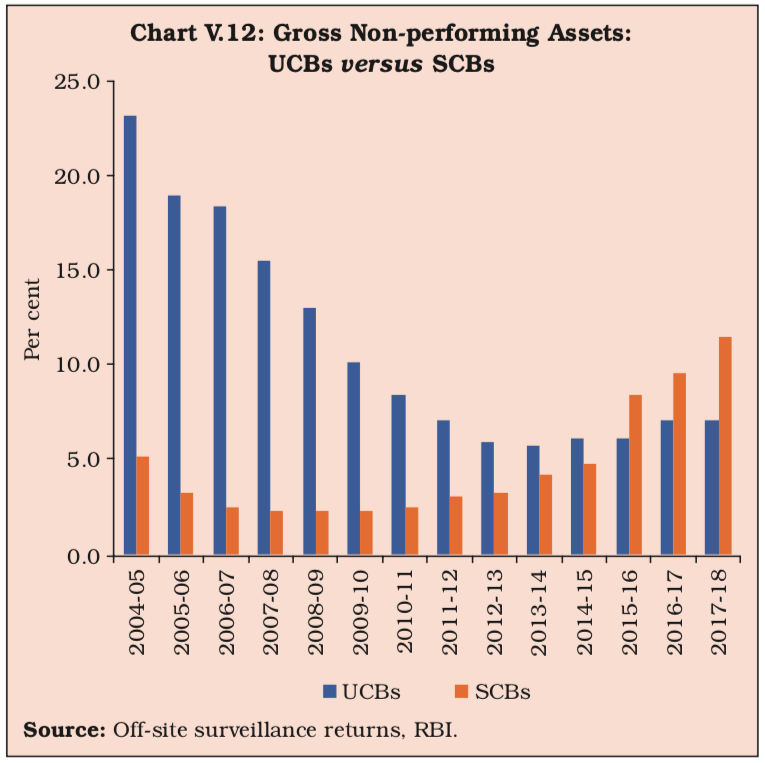 These are very encouraging trends and the RBI has even created a scheme for voluntary transition of UCBs to small finance banks in 2018. This would enable a graduation pathway for cooperative banks to become small finance banks and possible to become full fledged banks, allowing them to have a pan-India presence and the ability to carry out a wider variety of activities. This is critical in light of the fact that UCBs are increasingly facing competition from new players like payments banks, SFBs and NBFCs. If they are able to upgrade themselves and compete with such institutions, we would have a much stronger and more inclusive financial system.