State of the Economy

The economy has been going through a slump in the last few quarters. And while the day-to-day news can be quite negative, there have been some major structural changes in India over the last few years. In this post I seek to make sense of all of it by looking at it through the eyes of 3 economists and a start-up investor.

This is a long post and there are a few questions that I would like to address:

The Slowdown in Demand

One of the main topics that we see have seen the business news channels cover in the last few weeks has been the slowdown in consumer demand. This has come as a shock to a number of financial market participants, particularly because India’s consumption was expected to remain a strong growth driver in light of structural tailwinds tied to the demographic dividend.

To understand what is happening, we need to first categorise the Indian consumer correctly. Our country is incredibly diverse with people consuming things in different ways. For a long time the default categorisation was made between urban and rural demand. To understand the roots of the current slowdown, I believe we need to split the basket in a different way. Specifically, a framework laid out by the start up investor Sajit Pai, which divides the Indian consumer into India1, India2 and India3.

The Indian consumer market is actually much smaller than commonly perceived. The bulk of the market is catering to about 23 million households or about 110 million people. This is India1, a demographic with a per capita income of about $8800, similar to that of Mexico. The next 100 million Indian consumers form India2, which is the aspirational consumer market. In this bracket, the per capita income averages about $3000 and akin to the economy of the Philippines. Finally, India3 consists of the remaining 1126 million people who subsist at $1300 per capita income, comparable to Sub Saharan Africa.

This brings us to the first economist, Rathin Roy, and his views on the slowing home market demand. He postulates that the Indian economy till now has grown largely to meet the demands of the top 10-15% of consumers, the India1 segment. The fact is that the leading indicators of consumption in our economy reflect the demands of India1: Autos, FMCG, consumer durables, air travel, finance and so on. The people of India1 already have good access to all these products and therefore demand in this segment is plateauing. In fact, it is increasingly being taken up by imports i.e. foreign trips, studying abroad and imported consumption products like electronics.

This framework is unlikely to sustain in the medium term and needs to reflect goods and services that the average Indian consumes. These should be things like basic food and clothing, affordable housing, education, health and maybe a two-wheeler or a cycle. Companies till now have been mainly focused on India1, but to stay relevant they will increasingly need to find ways to cater to India2. Of course, there is the element of consumers moving up the income bracket and increasingly consuming products like India1, but that process will be slow and is not something we can count on in the short term.

Before we move on, there is one more aspect to consumer demand that should be addressed which is the Pay Commission. The second economist who we refer to, Neelkanth Mishra, discusses this in the video below. The pay commission’s affect on consumption, the fiscal deficit and economic momentum is underappreciated. Its impact on our economy is roughly to the tune of 2-2.5% of GDP and is a pure consumption stimulus. This boost happens once in 10 years and leads to a permanent shift in salaries and pensions of government employees. We are nearing the end of the current cycle and are therefore experiencing a tapering of the growth in consumer demand that the last pay commission provided.

Is the economic slowdown structural or cyclical?

I would encourage you to watch the following video by Neelkanth Mishra at the CFA society where he elucidates his views on the current slowdown:

To summarize, he believes that the current slowdown is cyclical in nature. Moreover, it reflects structural changes in our economy which have been led to large productivity gains.

Building of roads has also enabled a substantial improvement in electricity connections. Electricity enables the setup of supply chain infrastructure like milk chilling facilities in the village which lead to efficiency gains. In China, 90% of rural households have a washing machine and a fridge. As more houses in rural India are provided with an electric connection, we will likely move in the same direction. This frees up time for the women in the household and dramatically improves productivity. The provision of toilets and a direct water connection is likely to have similar effects.

Earlier, a fisherman would go to the nearest market to sell his produce without knowing the price for his goods. This led to a situation of oversupply or undersupply in different micro markets and therefore a large volatility in prices. The fisherman was a price taker in that if the price was too low in any given market, he could do nothing because his produce would get spoilt by the time he went to the next place. With a cell phone connection, the fisherman now instantly knows the market where he will get the best price and can therefore realize a better income and have less waste. From a macro perspective, it also leads to a fall in volatility of prices because demand and supply are better matched.

Similarly, within the last 3 years, the number of people connected to the internet has increased from 37% to 96%. The network effect of this has led to tremendous efficiency gains in terms of employment, inventory management and creation of marketplaces. The rise of the gig economy and the ability of social media to disseminate information means that part time workers can find jobs much more quickly and therefore be far more productive.

The outcome of all these productivity gains has led to a surplus particularly in terms of food output. As a result, inflation has shifted structurally lower. The problem we have now is that the cost of capital has not fallen in line with inflation and this is what is having a dampening effect on growth. To understand what is preventing interest rates from falling, we need to first understand the twin balance sheet problem.

Which brings us to the third economist and former CEA, Arvind Subramanian. In the video below, he describes the root of the problem and compares it to similar situations from around the globe:

The problem started in the 2000s when private capex increased massively. There was a big push for building infrastructure which led to a rapid increase in credit growth. Most of the projects were public private partnerships and therefore were financed by the public sector banks (PSBs). Over the years, leverage ratios of private companies went up because the financing of projects was mainly through debt and not through equity – promoters did not have as much skin in the game which encouraged reckless behaviour. There was also an element of crony capitalism.

This all came home to roost a few years later. Projected returns were not realised or approvals were not put in place leading to delays in execution and cancelled projects. The resulting funding crunch led to stress on the balance sheets of the corporates. The PSBs also fell under stress due to these loans turning into bad assets.

Unfortunately, the problem was not fixed quickly and it festered. Corporates borrowed in dollars and the rupee depreciation made things worse. Evergreening, extension and restructuring of loans by PSBs also exacerbated the problem. PSBs enjoy a lot of trust from depositors because they are owned by the government and this probably led to complacency and prevented sharp adjustments to outstanding loans.

When the problem was finally recognised, the PSBs needed to keep aside capital to provide for bad loans that had been given and this meant the banks had to curtail fresh lending across all segments. This has impeded the transmission of rate cuts. Similarly, private capex has fallen because of lack of availability of credit and because of deleveraging of private sector balance sheets. This is in essence the twin balance sheet problem: both the banks and corporates are stressed and it is creating a drag on growth.

Why the cost of capital needs to come down

We have written earlier about how India’s financial institutions can be classified into five buckets that do lending. Those are large PSBs, smaller PSBs, private sector corporate lenders, private sector retail lenders and the NBFC segment. One by one each of these legs has started to fall. The PSU banks are grappling with NPA issues, the private sector corporate lenders are facing promoter and management issues, and, after the IL&FS and DHFL episode, the NBFC segment is hampered.

This means that the banking system capacity is severely constrained. The only segment that can be looked at for growth are the private sector retail banks. Banking is an industry whose profitability is determined by how much they can control the risk of their lending book. Therefore these banks at most can grow at two times the nominal GDP growth. This has played out in the numbers: annual credit growth in banking overall has been roughly 7 per cent since 2014. However, PSBs have grown at 3 per cent whilst private sector banks have grown at 18 per cent.

M3 is the money that the distributor and retailers talk about when they say there is “no money in the market”. M3 has been lagging nominal GDP growth for over 2 years. What this means is that money is in short supply in the economy.

A lot of money is being deposited in the banks, majorly the PSBs, who have no capacity to lend. And even when they do lend, the interest rates they give are too high relative to inflation. This limits liquidity and has caused destocking across the entire supply chain. In the video by Neelkanth Mishra above, he talks about how this has a bullwhip effect: small changes at the retailer end of the supply chain aggregate to large changes in demand at the manufacturers end.

Clearly to restore credit growth, the cost of capital has to fall.

Putting it all together

India does face a number of headwinds: the cost of capital is too high, consumer demand is plateauing, we are in the middle of a credit crisis that will take time to clean up, the global environment is not conducive to higher exports and so on.

However, there have been a structural change in the underlying nature of our economy:

A number of these changes have resulted in short term disruptions, but when you add them all up, it gives you great confidence that the medium to long term growth path is likely to be much stronger and far more sustainable.

The first steps toward financial health 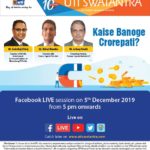